In the girls competition, teammates and classmates Emily Dietz and Julia Huren, sophomores at Westland John Glenn, faced off in the championship match. And in the boys final, it was a “west side” affair between O-K Red Conference rivals junior Josh Kukla of Grandville and senior Alex Stillwell of Hudsonville.

Dietz edged Huren 396-366 in the showdown between Rockets teammates who also are close friends.

“It’s amazing, it was so exciting,” Dietz said. “I never thought I would be here, then I got to bowl with my teammate at the end. It was just fun at that point.”

“We’re both great bowlers,” Huren added. “Whoever won it, it didn’t bug me at all. I just went up and I bowled, and whoever bowled better won.”

“What else could I ask for, as a coach? It was just a fantastic weekend,” Ralph Cabildo said. “Yesterday we shot fantastic; Davison just beat us. Then today, we had four girls that made the tournament, then four qualified in the top eight. At that point … we’re having a great time. Then all of a sudden two of them end up going against each other in the finals. And at that point, I knew that Westland John Glenn was going to have a state champ … and a runner-up. So it was better than I could ever think of.”

As soon as the final match between Dietz and Huren ended, the finalists hugged each other, and were then quickly swarmed by their remaining teammates for another round of hugs.

“They’ve all been like a family, and you saw that when they all ran down,” the coach said. “So it was great, great weekend.”

Huren said the whole weekend was a “really good experience.”

“It just shows you what you can do if you just work hard, practice hard; you’re always getting better,” she said. “Last year I didn’t even make it (to the Finals), and to come in second both days is just a real accomplishment and I can’t wait until next year.”

In the boys competition, Kukla needed perfection and a little luck before finally claiming the title. In the Quarterfinal against Clarkston sophomore Jacob Kersten, Kukla bowled a 300 for the second time of his life. But Kersten nearly matched it with a 290, and the duo eventually faced off in a roll off to decide who would go on to the Semifinals. 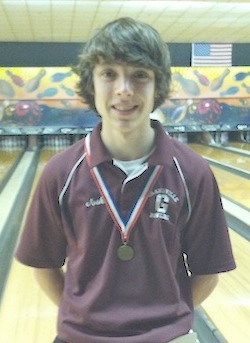 “That was exciting – we were just going back and forth, back and forth,” Kukla said. “The second game, I thought I was out of it. Once I realized that I was back in this, I just thought there was no way I was going to lose that roll off.”

Kukla emerged, and then escaped Macomb Dakota junior Justin Taylor in the Semifinal by two pins, 411-409. The momentum carried over into the Final, where he defeated Stillwell 470-384.

“It feels amazing, after all the hard work and bowling all year,” Kukla said. “The level of talent was really good. It’s really nice to go out and bowl like this against this type of competition.”

Kukla said it was “pretty cool” to see some familiar faces in the final four. In the other Semifinal, Stillwell defeated Grand Haven freshman Jimmy Mitchell 434-384.

“It was kind of a west side representation,” Kukla said.

Stillwell was proud of his final effort bowling for Hudsonville.

“Honestly, today I was just looking to go out with a bang,” he said. “I’m a senior. It was the first time I qualified for states. This is all so exciting, and then to make it this far, it just makes the day even better.

“Realistically I was just kind of hoping to make the cut. That was my first goal. Once I made the cut, all after that was just gravy. All extra bowling.  I couldn’t carry out the corner pins, there was just tons of pressure. I was anchor for our school, but this, the pressure level is just completely different. And Josh just pulled away with it.”