There was no one in front of her at Michigan International Speedway as she sprinted down the final stretch Saturday in the MHSAA Division 3 cross country meet.

It’s what was behind her that had Ackley running scared.

Hot on her heels was Lansing Catholic junior Olivia Theis, the only Division 3 runner to beat her this season.

“It was a terrible feeling,” Ackley said. “I thought she was right there. At first, I thought the finish line was closer, so I dug. Then I realized it’s a lot farther.”

“I was getting there,” Theis said. “I just couldn’t pick it up any more. I was ahead, then she pulled ahead and I couldn’t catch her.”

Ackley and Theis raced head-to-head in the two biggest regular-season invitationals of the season. Ackley was third behind two Division 1 top-seven finishers in the Spartan Elite Race at Michigan State, with Theis taking fourth. In the Portage Invitational, Theis was first in 17:21, with Ackley taking second by 12 seconds.

Ackley went through the mile in 5:46, backing off about 700 meters into the race after a blistering start.

“I had a really fast start,” she said. “Then I realized I was going like a 4:41 pace for a mile, so I slowed down and followed Olivia.” 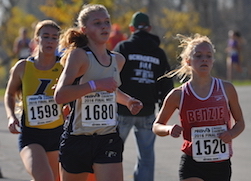 Lansing Catholic put three runners in the top five in the team race, but had to count 31st and 47th places. Olivia Theis was second among team runners, Lauren Cleary was third and Jaden Theis was fifth.

Benzie Central was third with 125 points.