It was the desire to beat Gall, whose times caught her attention, that drove Ackley to start training seriously back then.

“I raced her in eighth grade once at the MEGASTAR meet,” Ackley said. “When we were both in eighth grade, we raced the 3,200. My dad and I trained over the winter so we could race her, because we saw her time and she was really good. That’s how I got into running, too. She got me into running.”

Ackley and Gall put on a show that day as eighth-graders in the 2015 Mid Michigan MEGASTAR Meet at Shepherd, running times that would’ve been phenomenal for most high school athletes. Ackley edged Gall by half a second with a time of 11:02.37. 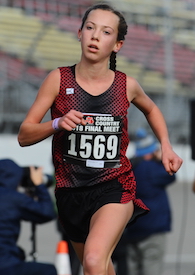 They’ve continued to race in close proximity to one another through high school. In their final cross country meets in their school uniforms, Ackley held off a strong challenge from Gall to win her third MHSAA Division 3 individual championship in 17:42.8 on Saturday at Michigan International Speedway. Gall was second in 17:53.6. The rest of the field was 47 seconds back.

Gall has finished second to Ackley the last two years, though her time Saturday brought her considerably closer than in 2017, when the gap was 26.8 seconds. In 2016, Ackley was first and Gall took fifth. In 2015, Ackley was second and Gall was third.

With two Ackley sisters and a cousin in its top four, Hart repeated as team champion with 43 points, beating Grandville Calvin Christian by 100. Hart had its five scoring runners across the line before Calvin Christian’s top runner finished.