MOUNT PLEASANT – Deep in the woods, so far west of municipal Mount Pleasant you’d think you’d gone too far, findable only by invite and the line of cars parked alongside the road, Michigan’s most intriguing cross country team is getting ready to show why.

Well, that might be a little dramatic. Sacred Heart has run early-morning August practices at Deerfield Nature Park for years, and there’s a sign for Camp Weidman and a swinging metal gate right off Vandecar Road to help point the way to the Irish’s preseason home.

But the whole “intriguing” part? That’s hard to dispute.

That’s pretty incredible for a school of 130 students – and invites anticipation for this fall, as the Irish begin the race season Saturday with six of their top seven runners from 2016, plus another standout who missed nearly all of last fall with an injury.

“In D4 this year, we’re the team to beat. But compared to everybody else in all the other divisions, we’re just a little team. So we look at everybody else, look at other people’s times even not in our division, to have that motivation and drive to keep going and be better.”

After winning every race they entered last season, the Irish do have some ideas for another encore.

They start Saturday with the Ryan Shay Memorial Invitational, a 2-mile race at Central Lake. They hope to end Nov. 4 at MIS holding an MHSAA championship trophy for the third straight season, becoming the seventh Lower Peninsula girls team to win three straight titles and first since Clarkston and Goodrich both completed three-year runs in 2005.

Along the way they’ll again see how they match up with many of the state’s best small schools – but with a special opportunity Sept. 15. Sacred Heart will run the “Elite” race at the Spartan Invitational at Michigan State University, which annually includes many of the state’s fastest teams regardless of division and this season will be filled mostly with Division 1 programs plus a few from out of state.

Most years, most if not all Division 4 teams would be severely overmatched against the “Elite” competition. But this Sacred Heart team is not typical for one of the state’s smallest schools. In their most recent high school race – last year’s Final – all seven runners broke 21 minutes.

“It’s hard to imagine that after the past two seasons we still have something to look forward to,” longtime Sacred Heart coach Mark Zitzelsberger said. “But we have eight gals that I think we can get under 20 minutes, and if that’s the case and they’re healthy we should be pretty tough to beat again. They girls have continued to work and improve. Their goal is to try and break their record.”

Sacred Heart scored 34 points at last season’s Finals – cross country is scored by adding up a team’s placers, so lower is better – to beat by a point Rockford’s winning score of 35 in LP Division 1 in 2000. That was the first year cross country moved from classes to divisions for postseason competition, and no team has scored better since the switch. In fact, no team in LP Division 4 has scored lower than Sacred Heart the last two seasons.

But the Irish plan to go low again. And early returns make it look possible.

The McConnell sisters despite being one fewer are poised for another big season. Bailley’s fastest time last fall was 18:38, and she ran 18:30 during an offseason meet – and has her sights set on Alexis’ personal-record 18:10. Cammie has finished 17th and fifth, respectively, at her first two Finals, and Desiree is showing perhaps the biggest improvement from last year. Sacred Heart runs a “marathon mile” session where the girls run miles at race pace as far as they can while keeping it up – and she ripped through five miles last week, tying the program record. 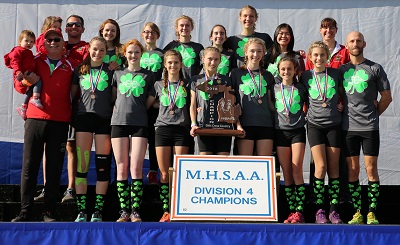 McDonald improved from 26th to 11th over her first two Finals, Nelson was 10th as a freshman in 2015 and 20th last fall, and Fitzpatrick has posted Finals finishes of 26th, 47th and 31st her first three seasons. Nowak counted as the fourth-fastest runner on the 2014 team that finished third in LP Division 4 before her near all-state run a year later.

Zitzelsberger called it a “coach’s dream” to have so many runners who could be the lead most seasons. He’d never seen anything like it before he began watching them emerge during junior high. But it also made sense once they arrived.

The McConnells’ parents Rob and Tori are lifelong competitive runners who both ran the Boston Marathon earlier this decade, and Rob with Nelson’s mom Luanne Goffnett have coached in the Sacred Heart program and laid much of this foundation with the junior high program.

Aside from Nowak – whose family moved from the Lansing area before her ninth grade year to follow her dad’s job – the rest of the girls have grown up running together and playing other sports successfully too. Scout Nelson and Nowak also were standouts on last season’s girls basketball team that made the Class D Semifinals and MacDonald came up from the junior varsity, while Nelson, Nowak, Bailley and Cammie McConnell all earned all-state accolades in helping the track & field team finish fifth in LP Division 4 in the spring.

“We all came up from middle school, and it’s kinda become a little family,” Fitzpatrick said. “We became attached to each other.”

Twenty years ago might seem like yesterday when Zitzelsberger recalls just trying to find five runners total after taking over the program. His 1998 team had two girls, but he was able to pull in enough off the track team to build the school’s first MHSAA girls team champion in the sport, in Class D, in 1999.

A decade later, Bridget Bennett won back-to-back LP Division 4 championships in 2008 and 2009. There have been other stars. But he’s never enjoyed a collection of talent like this.

And while Sacred Heart likely won’t be expected to win at MSU next month, it will be a race worth watching as the Irish push to add another fine finish to a memorable and growing legacy.

“We’re such a small school, and most of the people running in the Elite are huge,” Bailley McConnell said. “They have thousands of high school students, and our school is so little. So to be able to do that would be amazing.”