After finishing runner-up at the 2015 Lower Peninsula Division 3 Final to Traverse City St. Francis’ Holly Bullough as a freshman, Ackley was driven for more Saturday at Michigan International Speedway. Not only did she emerge as champion this time, but she crossed the finish line in 17 minutes, 40.6 seconds to break the LPD3 meet record Bullough set last year, earning the Michigan National Guard “Performance of the Week.”

Ackley is the latest standout from a running family. Hart’s only other cross country Finals champion was her aunt Cathy Ackley in the Class C team race in 1985. Adelyn's father Calvin Ackley was an All-American at Cornerstone University in 1992 and 1993, and another aunt Mindy Whitney is Hart's girls and boys track & field coach. Adelyn’s older sister Alayna is a junior at Hart and finished seventh Saturday with a time of 19:12.4. Together they led the Pirates to a seventh-place team finish.

Both Ackley and runner-up Olivia Theis from Lansing Catholic broke Bullough’s record time, Theis leading the race until Ackley got past her on the final turn at MIS heading into the home stretch (although Ackley mistook how close they were to the finish; see more on that below). The Finals championship actually was Ackley’s second – she also won the LPD3 track title in the 3,200 in the spring. She holds the Hart school records for cross country 5K (17:16) and track 3,200 (10:49) and 1,600 (4:56), and also is a strong student and avid hunter with interest in pursuing a career that will allow her to work in the outdoors.

Coach Terry Tatro said: “Having coached at Hart for 18 years, I’ve had my fair share of successful runners over the years. I can say with all honesty that Adelyn is in a class by herself. It was quite evident early on that Adelyn had the skill and heart to become a quality competitor. She has followed in her older sister’s footsteps, as Alayna provided the competitive spirit that has driven the sisters to running success. The sibling rivalry has provided the springboard to send them to the next level of competition. Adelyn was undefeated in conference, Regional champion, and of course state champion this year. ... One thing I admire most about Adelyn is her modesty. If you did not know who she was, you wouldn’t be able to pick her out of my girls team. She’s humble, quiet, and is ‘just one of the girls.’ When the gun goes off, it’s a different story. She’s tenacious, strong, has an incredible stride; combined with her competitive spirit, she’s the one to beat.”

Performance Point: “I think it's really worth all the time I put in,” Ackley said of her latest championship, “and I realized how much fun it was just being able to hang out with the team and running with my family.”

Record breaker: “That really benefited me for (Theis) to be right next to me. … I was going to try to pass her at the 2-mile mark, but I couldn’t push myself to do it. When I heard my dad scream, I was about to give up. I was like, maybe I’ll just take second. But I heard my dad scream really loud (‘Addy, come on, you’ve gotta go now.’), and it kinda hit me back into race mode. I was like, I can still win this. I realized it and gave it all I’ve got and sprinted past her because I thought the finish line was right there. Then I realized I have a long way to go.” 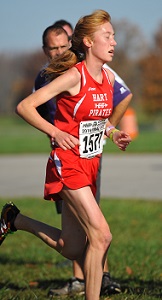 Family tradition: “Probably all of my love for running came from (my dad). We used to run together when I was in seventh grade, and all of my cousins love to run and so does my dad and mom. I guess we just kinda realized God gave us a talent for running, and I want to use that talent to the best of my ability. In seventh grade I didn’t really like it that much. But when I realized I had some good talent, I loved it so I wanted to train more and see what I could do.”

All-terrain cross-train: “Sometimes when we take a week off (after cross country season), I go coyote hunting, and that’s been a really big benefit for me because you have to chase coyotes through the snow. I also like to duck hunt too; it’s hard to go through the swamps.”

What’s next: “I’m going to try to train more. I have probably a few goals I want to break in (running) time. In cross country, I want to break 17 minutes. I think I’ll try to do that next year or my senior year.”

PHOTOS: (Top) Hart's Adelyn Ackley (1577) leads the pack early on the way to winning the Lower Peninsula Division 3 championship Saturday at Michigan International Speedway. (Middle) Ackley speeds through another stretch on the course (Click to see more from RunMichigan.com.)