MARQUETTE — It was a day for making history for the Houghton girls here Saturday as they edged reigning champion Marquette 56-58 for their first Upper Peninsula Division 1 cross country title.

Houghton previously had finished Finals runner-up in 1989 and 2007.

“All of the girls really stepped up today,” said Houghton assistant coach Erik Johnson. “Marquette and Sault are tough, and Westwood has a strong team. We worked our tails off.

“We were off for two weeks due to COVID-19, but the girls ran on the own and it paid off. This was a tough year with the virus and everything else. Our No. 1 goal was to get here and finish the season.”

Houghton junior Paige Sleeman was crowned champion for the first time, covering the 3.1-mile course at Presque Isle Park in 20 minutes, 55.2 seconds on this chilly and overcast day. She was followed by Westwood sophomore Heidi Meglathery (21:00.8) and classmate Ingrid Seagram (21:19.4).

“I just tried to stay with the top runners,” she said. “I like running in colder weather.

“I wanted to win and wanted our team to win. We were willing to do whatever it took. Marquette has tough runners. Ingrid had a real good race. I felt she held it together well. All the teams and girls ran well.” 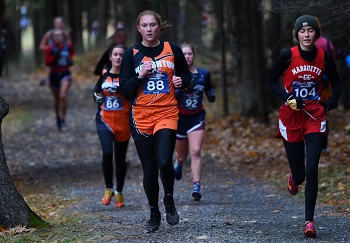 Seagren, who has asthma, said she had some breathing issues.

"I’m trying to get it under control,” she added. “I’m still happy with the way I ran. I just had to keep preparing myself. Paige had a great race. I’m really proud of her.

“This is really a boost for our program. I’m super proud of our team and how we ran.”

Meglathery was fresh from earning her first Mid-Peninsula Conference title.

“I really, really wanted to win,” she said. “I just thought about the positives and helping the team. I think winning the M-PC gave me some momentum. It was tight the whole race. Ingrid was right behind me for a while, then she started trailing a little. There were a lot of hills on the course and it was super windy by the lake (Superior). I like running in the cold more than in the heat.”

“Hats off to Houghton,” said Marquette coach Kyle Detmers. “They missed two weeks and their girls still came through. Their 1-2 punch is hard to beat. Olivia was battling a cold, but she came through for us. This is the only meet we lost all year, yet there’s nothing inside me that’s disappointed.”