BROOKLYN – Rylee Tolson got her rookie mistakes out of the way last year.

Running for the first time in the MHSAA Lower Peninsula Division 3 cross country championship, Tolson was too wired, burning up needed energy before she ever started the race.

“It was a rough experience, but it was definitely a learning experience,” the Stockbridge sophomore said. “Last year, I was really, really nervous. I got myself all pumped up. I was running all over the place before. I learned I have to relax, stay calm and focus on the job that is in front of me.”

That approach served Tolson well when she approached the track Saturday at Michigan International Speedway in a six-way battle for the championship.

She took the lead at the 2.5-mile mark of the 3.1-mile race and focused on her pre-race plan to maintain her lead over a hard-charging pack. She finished in 18:31.4, winning by 7.6 seconds over Maddy Bean of Richmond. 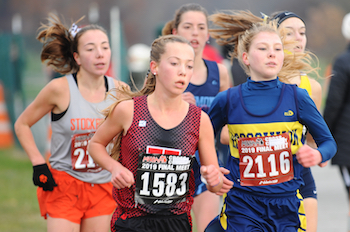 As a freshman, Tolson finished 20th in the Division 3 meet in 19:48.7 after winning the Regional. She maintained her composure Saturday even though she had a momentary freak-out moment leading the race coming down the long straightaway.

For Bean, taking second place was a huge accomplishment after placing 40th in Division 3 as a sophomore and 78th in Division 2 as a junior.

“Once we got on the track, we spread out,” Bean said. “I knew it was now or never. She was cooking. It’s nerve racking, because you never know. But it’s awesome at the same time, because the spectators help. It’s just surreal being here.”

Hart won its third straight team championship by a 77-133 margin over Shepherd. Grandville Calvin Christian was third with 136 points.