She was merely stating the obvious.

Being one of the nation’s top runners and competing in the smallest division at the MHSAA Lower Peninsula cross country championships only accentuates the gap between VanderKooi and her competition.

The Division 4 girls race Saturday at Michigan International Speedway was a battle for second place as VanderKooi ran solo up front to repeat as champion by 1 minute, 11.7 seconds with a time of 18:11.0.

So, how does VanderKooi maintain her focus in races when there is nobody else around to push her?

“I try to recite Bible verses, and that helps sometimes,” she said.

Her favorite, she said, is Philippians 4:13.

“I can do all things through Christ who strengthens me,” she said. “I like that one a lot.”

VanderKooi followed up her Division 4 championship last year by placing third in the Foot Locker National Championship in San Diego. She plans to run the Midwest Regional on Nov. 30 in Kenosha, Wis., to qualify for the national meet Dec. 14.

VanderKooi had a gap on the pack by the end of the 700-meter opening straightaway. Riley Ford of Marlette was in second place, but had no delusions of trying to catch VanderKooi. 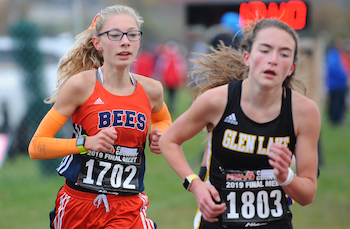 “I just ignore that she’s there,” Ford said. “I know she’s at a way higher level than I am. I try to do what I can do. My goal was to get second, and it happened.”

Ford held second place the entire race, holding off a brief challenge from 2018 runner-up Madison Volz of Lansing Christian at the two-mile mark. Ford finished in 19:22.7. Volz was third in 19:30.2.

“Last year I got fifth,” Ford said. “I was holding second, then I got passed at the two mile and kept getting passed and couldn’t hold it. The last two weeks, I’ve been doing a lot of kilometer repeats at race pace. My pace was ingrained in my head, and it really helped. I just wanted it really bad. I haven’t had the best season.”

In the team competition, Bridgman ended Mount Pleasant Sacred Heart’s four-year run as champion by scoring 132 points. Sacred Heart was second with 148, and Kalamazoo Christian was third with 174.