GLADSTONE – The Cedarville Trojans went out with a bang for their school and the 2021 season Thursday afternoon in Gladstone, taking the overall team championship and placing first and second individually at the MHSAA Upper Peninsula Division 3 Finals at the Oaks Caddyshack Club in Gladstone.

The Trojans, beginning this fall, will merge athletic programs with nearby DeTour and become the Islanders.

“I knew we had a good shot with our girls team because all five of our girls are pretty solid players,” Cedarville coach Rob Freel said. “I didn’t know exactly what to expect, but I knew we would have a good shot at it, and I think they all played really well today.”

For both Autore and Miller, it was their best outing ever.

“It’s pretty decent because that’s never happened before,” said Autore. “I did a lot of firsts today, so that was good. (The 92) was my best. Even on nine, I’ve never shot that low before.” 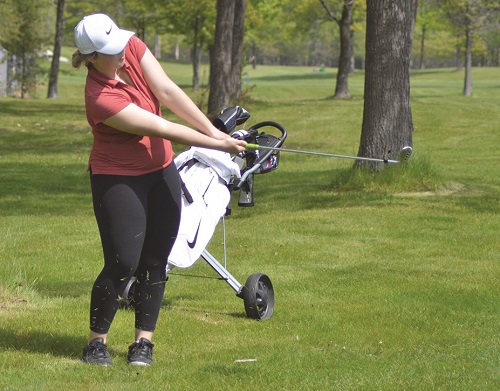 “My last nine could have been a little better, but it’s better than I’ve ever shot before,” Miller added.

Freel said both Autore and Miller stepped up to the occasion for the U.P. Finals.

“Zoe puts in a lot of extra work. She takes some private lessons ... and she’s always putting in extra time on the course,” Freel said. “Lauren plays a lot, too. They’re pretty solid players.”

Carney-Nadeau's Heidi Kirschner finished third individually with a score of 99.

“This is the best round of golf I’ve had in my entire life,” Kirschner said.

When the tournament began, Kirschner said she did not think third place was even a possibility.

“I haven’t been driving well the whole season, and today my drives were just on point and so were my irons, so it just kind of worked out,” she said.

Sarah Snyder of Powers North Central shot 100 and Cedarville’s Hayley Kohlmann 106 to round out the top five.