A year later, that trio helped the Falcons move up to ninth. Then came last season, and plenty of adjustments, including a move to Division 2 – but Divine Child kept moving up the leaderboard, tying for fifth with Zeinab Saad, Julia Lizak and Madina Saad again leading the way.

All of that set the stage for this weekend at Battle Creek’s Bedford Valley, and especially the final round. Those three seniors, along with junior Mary Ronayne – who joined the Finals lineup in 2020 – posted the best score of Saturday to overtake first-round leader South Lyon and lock up the first girls golf championship in program history.

Divine Child’s 344 made up for a six-stroke deficit after Friday and kept the Falcons ahead of eventual runner-up Byron Center with a two-day 691, good for a nine-stroke win.

“It’s kinda unbelievable, but my team worked so hard for this and it’s been our goal since freshman year – and it feels good to finally complete our goal,” Lizak said. “We’ve been doing so good this year as a team, and we just had a feeling – especially last week talking about it. We came in thinking we could place really well.

“They’re my best friends, and I couldn’t imagine doing it with anyone else. I love them all.”

Lizak cut five strokes from her first-round score to finish with a two-day 157, good for seventh individually, and Zeinab Saad shot matching 82s to tie for ninth. Leila Saad was three strokes better Saturday to finish with a 173, and Ronayne carded a 197.

Zeinab Saad and Lizak had missed the top-10 individual list in 2020 by two and three strokes, respectively, when the Finals were just one round because of COVID-19 precautions. 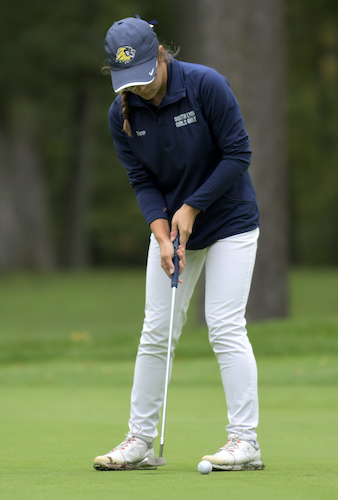 “After last year, when we tied for fifth, I knew all we needed was just a little bit more,” Divine Child coach Dan Berry said, “and with the possibility that if it all came together and they played the way I knew they could play, we could get there. And they did, and we pulled through."

A year ago it was South Lyon celebrating its first team Finals title, and the Lions finished a solid third this time with a lineup of two seniors and three juniors – including a standout who picked up her second individual championship.

Junior Gabriella Tapp shot a two-round 144 to finish four strokes ahead of runner-up KT Leinwand of Portage Northern and add to the individual title she won as a freshman. Tapp tied for sixth a year ago.

“When I came here I was hoping our team would be able to win, and I was just rooting for them all day. Myself was a secondary thought,” Tapp said. “We have a lot of strong players on our team, and I think next year we’ll definitely have a shot too.”

Following Leinwand, a sophomore, in the individual standings was Byron Center sophomore Macie Elzinga, who cut two strokes from her Friday score to finish the weekend at 152. Her team was tied for fourth after the first day and cut eight strokes during the second to finish at 700.

Byron Center will graduate only one from its Finals lineup.

“At the start of the season, no one on our team thought we’d even make it here. I played really well and a lot of people on our team played well, so we’re really happy about it,” Elzinga said. “I’m not going to stop working hard at this. I want this one bad. There’s all the best players in the state here, and to be able to compete against them is pretty cool. I learned a lot about my game and how I can handle pressure, and I’m proud of how I played.”