The Mountaineers atoned for a third-place finish a week earlier in the Mid-Peninsula Conference tournament, also held here at Oak Crest Golf Club, to overcome M-PC champion Manistique for the MHSAA Upper Peninsula Division 2 title title. IM finished at 490, a dozen strokes ahead of Manistique, which slid back to third.

A week earlier Manistique shot 460 while IM had 499. Ishpeming Westwood, the M-PC runner-up, competed in the Division 1 Final on Thursday in Ishpeming.

"Each one of them improved their game from the Mid-Pen Conference," said IM coach Bucky Johnson. "We played a little better and a few of their (Manistique) girls didn't play as good."

Johnson said he discussed his team's prospects with the girls leading up to the U.P. Finals. "We have been chasing Manistique all year. I told them if we keep getting better we will have the opportunity to win the championship," he said.

The girls responded, which did not surprise Johnson because they have participated in all the team practices and meets all season. "Their consistency paid off; they were persistent," he said. 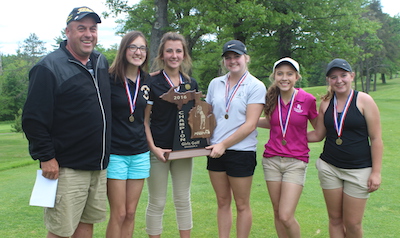 "If each girl improved their score by five to seven strokes, I knew we would have a legitimate chance of winning," said Johnson. "All year I thought we would have a chance."

One member of the Emeralds who did play well was senior Rachel Ryan, who earned medalist honors with a 105 (52-53). "She has been here four years and has been steady," said Taylor.

Ryan credits her father, Manistique athletic director Rob Ryan (one of the better men's golfers in the Upper Peninsula), for getting into position to take the top spot.

"He never pushed me to play, but he definitely encouraged me to play," she said. "I learned everything I know from him."

Ryan kept pushing forward throughout her round, which helped her maintain poise when she had some poor shots. "I try not to get upset; that would never help," she said. "I try to stay pretty mentally stable. I try to stay calm and collected."

That solid thought process also came in handy when she began to rely on her "go-to" 3-wood for many tee shots. "I started making safer choices," she said of declining to hit driver.

She had problems putting, agreeing the greens were notably slower than at her home course, Manistique Indian Lake, which is known for its slippery putting surfaces. Faced with the slower greens, she said, "I stood over the ball and told myself to hit it to the back of the hole.

"I knew if I played my best I would have a chance (to medal). I just tried to relax and have fun. This is my last one ever (as a high school golfer)."