JENISON – The Jenison girls golf team is playing with heavy hearts this season.

Teammates and coaches are mourning the loss of the Wildcats’ No. 1 player, Sydney Carfine, who would have been a senior this fall.

The 17-year-old Carfine was tragically killed on the night of June 14 in a two-car crash in Ottawa County.

“It was like disbelief, like this can’t be real,” Jenison girls golf coach Linda Reimink said. “I was up north, and I knew that I had to get home and get together with our team. It was very emotional and just devastating for everyone.”

Carfine’s death shook the Jenison community and took its toll on her teammates, who had to deal with the loss of their fun-loving, outgoing and talented teammate.

“It was definitely hard for all of us, and the day after we got together to see each other and talk about it,” senior Amanda Smaby said. “I think as a team we’ve come together more because of it because we all loved Syd, and it’s making our season more meaningful.

“We’re looking at it as inspiration instead of keeping us from having a great season because that’s what Syd would want. Just to enjoy golf because she made it fun and she loved golf.”

Carfine was expected to be a leader on this year’s squad, and was looking forward to her final year of high school.

“She sent a long text to the team at the end of the school year how this was going to be our year and how she wanted to do sweatshirts with last names, and we’re going to carry through on that,” Reimink said. “We also have smiley faces on our shirts in honor of Syd because that was her motto: ‘Just smile.’”

While Carfine’s unexpected death has been hard to comprehend, senior Sophie Hoekstra said she thinks of her often on the course.

“One way I cope with it is I just remember that she is watching over me,” she said. “When I make a bad putt, she’s up there laughing at me, and when I have a good shot I say in my head, ‘At least you were here to see it.’

“It’s not too different because I know that she’s still here, but at the same time it’s really different because we don’t get to see her smile or get our hugs anymore. She was always so positive and always made friends with everyone she was with.” 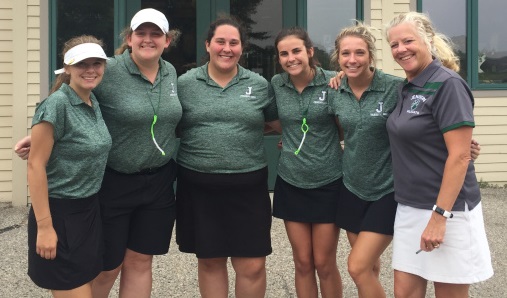 Carfine was a dedicated student of the game and worked hard to improve in all aspects.

She made the varsity team as a freshman at Byron Center and helped the Bulldogs reach the Lower Peninsula Division 2 Final.

Carfine moved and transferred to Jenison, where she emerged as one of the top players on the team and in the Ottawa-Kent Conference Black the past two seasons.

Despite her prowess on the golf course, Reimink said Carfine kept her sport in perspective and was dedicated to success in the classroom as well.

“She was really competitive, and when she got on the golf course she was competing, but also giggling about boys or something going on in school,” Reimink said. “It wasn’t all business, and she was way more than a golfer. She really cared about how well she did in school. When she had a freak out moment, it wasn’t about golf – it was about school. She was really committed and worked hard on her studies. She was very creative with her writing and art.”

Reimink said the team is doing its best to cope, but Carfine’s absence at practices has been noticeable.

“I think all the girls internally have handled it differently, but Amanda and Sydney always had individual competitions and that competitive nature against someone on the team she is going to miss big time,” Reimink said. “I feel like in practices, (Sydney) was really focused on her game, and we’re going to miss that. She was such a competitor and had big hopes for a really good year.”

Smaby said Carfine brought out the best in her and her teammates.

“It’s definitely a different environment now without her because she always added so much and was the leader of our team,” she said. “She always gave us a passion to want to do better, and she would make practices fun.

“She was the one we could talk to about anything. She made jokes and made everything a little lighter mood. It’s sad to think about, but the impact she made on our team and our program was just incredible.”

After struggling through back issues as a sophomore, Carfine qualified as an individual for the Division 1 Final last season and had aspirations to play golf in college.

“Her junior year, that was her number one goal,” Reimink said. “To get back to state.”

Carfine was honored last week during play at the annual Jenison Invitational. It was renamed as the Sydney Carfine Memorial Tournament.

There will be a moment of silence for Carfine at the Wildcats’ home football game Sept. 6.