The Mustangs, who finished third at the Lower Peninsula Girls Golf Division 4 tournament in 2014 and second last year, broke through with a 36-stroke victory over second-place Livonia Ladywood on Saturday at Forest Akers West in East Lansing.

But for veteran Lutheran North coach Lori Gill, the road to the title started much more than three years ago – last century, actually.

“This was 19 years in the making,” said an emotional Gill after leading Lutheran North to not only its first-ever girls golf championship, but also the first MHSAA girls golf title for any Macomb County school.

“You are looking at one happy, happy coach. This is a really special group of girls. They are fun, and they are committed.”

Lutheran North took command of the two-day event with a solid team effort on Friday, building up a 16-stroke lead, then came back with an even better team score Saturday to zap any potential drama out of the team competition. Kalamazoo Hackett, the two-time reigning champion, placed third.

Lutheran North’s fourth counted score on each day was an 89 – from senior Madison Mohr on Friday and junior Grace Farquhar on Saturday – as the Mustangs were the only team in the field to not count a score in the 90s or higher either of the two days.

“The best part is that it was a total team effort, and we all came through for our coach,” said Martens while cradling the championship trophy in her arms. “Each year we were getting closer and closer. It’s just so nice that we took that final step.”

The battle for individual medalist honors was closer than the team competition, but the experience – and power – of senior individual qualifier Nichole Cox of Maple City Glen Lake was too much for the rest of the field.

Cox capped off a stellar four-year career by winning her third consecutive Finals medalist honor, to go along with a fourth-place finish as a freshman. Cox fired an even-par 72 in Friday’s opening round and overcame a couple of bad holes on Saturday to finish with a 78 for a two-day total of 150 and a four-shot edge. 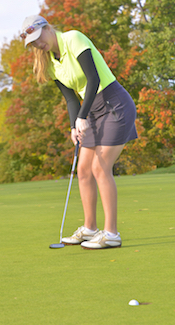 “I hit my driver great both days – almost all of them were straight with a little draw,” said Cox, who blasted a 280-yard drive on Saturday on the 407-yard, par-5 second hole. “I’m proud of myself because I had two double-bogeys today, but I hung in there.”

Cox, who will play golf at Bowling Green, had three birdies in Friday’s opening round and none on Saturday. She shook off a four-putt, double-bogey on No. 5, her second hole Saturday morning, then started racking up pars en route to her “three-peat.” She became only the ninth girl in MHSAA history to win at least three Finals individual championships.

The closest pursuer to Lutheran North in the team race turned out to be Livonia Ladywood, which improved on its fourth-place Finals finish one year ago. The Blazers captured the second-place trophy behind the big three of junior Gabriella Scopone (83-83-166), who placed ninth, senior Lydia Cranmer (86-81-167), who was 10th, and senior Jordyn Rioux (85-87-172).

But this was Lutheran North’s time for a title.

Martens, the senior leader for the Mustangs who will play golf at Oakland University next year, said the team talked about staying aggressive in spite of its 16-stroke lead after Friday’s opening round.

“Sixteen strokes sounds like a lot, but it’s only four strokes for each girl,” said Martens, whose older sister, Samantha Martens, was also a standout for Gill at Lutheran North. “We are a long-hitting team, and we wanted to keep playing our game and try to extend the lead.”

Gill, whose team was playing in the Finals for the sixth straight year, said another key to the Mustangs’ terrific run over the past three has been playing top-flight competition from Division 1 and other larger schools throughout the regular season. Lutheran North made a statement way back in August by winning the 15-school Flint Powers Invitational, then provided the other bookend to its spectacular season Saturday with a 36-stroke runaway.