Okemos sophomore Allison Cui won the MHSAA Final individual title in that division Saturday by shooting the second of a pair of 73s for a weekend 146 and three-stroke edge over junior Anci Dy of Traverse City West, who shot 76-73-149 for the 36-hole tournament at Forest Akers West on the Michigan State University campus.

Freshman Kate Brody of Grand Blanc was the first-round leader with a 72 but finished at 150 total, good for third place ahead of two golfers at 151 to round out the top five – Utica Eisenhower junior Ariel Chang and Plymouth sophomore Bridget Boczar.

“I’m just absolutely ecstatic,” Cui said. “I never thought that I’d be able to get this. I knew I had potential to, but for it just to all come together and have it work out in the end is amazing. So, to win it this year means a lot to me.”

Last season Okemos played in Division 2 and Cui tied for first place as just a freshman, but succumbed in a playoff to then-senior Kay Zubkus, who is now playing golf at Oakland University.

Cui said this win could be credited to solid putting, and good course management.

“I was able to pretty much two-putt from a lot of spots, even if I was far away from the hole,” she said. “But I also think it was about course management, playing smart and knowing where to hit the ball in good places to miss. I think that really helped lower my score.”

Cui was a participant in Augusta National’s Drive, Chip & Putt national finals in 2017, and Brody is heading to Georgia in April as the most recent winner of the DCP Regional contested at Oakland Hills Country Club. 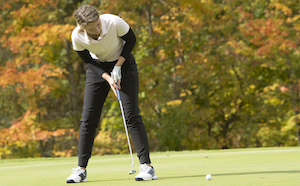 When comparing her experience at Augusta National with wearing the Finals title medal around her neck, Cui replied: “Honestly, they’re both such different experiences, but this win and doing that are about the same.”

No. 1-ranked Northville won the team title for a second consecutive season, also with the help of youth like junior Katelyn Tokarz and freshman Samantha Coleman. Led by senior captains Sedona Shipka (who tied for ninth overall) and Sufna Gill, the Mustangs pulled away from the field by shooting 322-324-646. Taking second was Grosse Pointe South, with scores of 336-342-678, followed by Plymouth (352-338-690) in third, and Grand Blanc and Okemos each totaling 692.

“All year one of the challenges has been to meet the expectations the girls set for themselves last year, because almost every tournament we went to people told us we were going to be the state champions again. So maintaining our focus throughout the season,” said Northville coach Chris Cronin, pointing to the reasons for his team’s successful repeat run. “And I think the other thing these girls do is they just compete, from start to finish. Whether it was the first tournament of the year to the last tournament of the year, to 9-hole matches, they always compete. So, I think that’s the one thing that’s made us successful.”

Shipka said she took her role as co-captain seriously as the team prepared for another title run.

Gill, who placed fifth at the Division 1 Final last year, said the team dynamic is what led to a second season of elite success.

“I think we’ve all worked really hard,” Gill added. “We’ve all played together. We win as one, we lose as one and I think we’ve definitely been consistent and we’re just really proud of ourselves and our teammates for carrying us the whole season.”

An additional highlight was enjoyed by Macomb Dakota sophomore Helen Buk, who sank a hole-in-one on the 155-yard 12th hole.