The Fighting Irish ace capped her career Saturday at Michigan State University’s Forest Akers East with her third Division 3 Finals individual championship – becoming just one of five Lower Peninsula girls to achieve that feat. She shot a two-day 152 and won a one-hole playoff to clinch the title, and led Notre Dame Prep to tie for fifth as a team in earning the Michigan Army National Guard “Performance of the Week.”

Staskowski has thrived in pressure situations. As a freshman, she won a playoff to claim the final individual qualifying spot from her Regional – and went on to take fourth at the Final. She missed most of her tennis season the following spring and then a summer of golf with a broken rib – but she came back in the fall and won her first MHSAA Finals also in a one-hole playoff while leading her team to a runner-up finish. She cleared the Finals field to win by eight strokes as a junior – shooting career-best rounds of 72 both days – in helping the Irish finish 13th.  Staskowski owns school records for low 9 (34) and 18-hole scores and 9 and 18-hole averages. This season she averaged 37.3 strokes for nine-hole matches and 77.7 for 18.

This fall’s success followed a highlight-filled summer that included a run to the Round of 8 match play at the Michigan Women’s Amateur in August. Staskowski finished runner-up at the Oakland County Invitational in September and won her Regional with a 75 on the way to shining again in East Lansing. On the same day she won her third title, friend Anika Dy from Traverse City West also won her third straight Division 1 championship as together they became the first to win three titles since another friend, Maple City Glen Lake’s Nichole Cox, won three straight in Division 4 from 2014-16. Staskowski is committed to continue her career next year at Central Michigan University. She carries a 3.4 grade-point average and is considering studying biomedical engineering.

Coach Kyle Lilek said: “Dani has been playing golf for about 15 years. She practices every day, has taken lessons from a variety of swing coaches, and even taken lessons from a mental coach. She has always worked hard at her game and dedicated herself to golf. However, at her freshman year tryout she stepped up to the tee, and due to nerves, duffed her tee shot; I always remember that story, because as talented as she is, she's still a teenage girl who deals with the same obstacles as anyone else ... and overcomes them all. … Dani thrives when presented with obstacles, and her high school golf career is proof of that fact. She has played and won three playoffs in the past four years. … This is what she does, and she thrives when presented with direct competition. It can seem overwhelming and super-human to achieve at Dani's level the way she does, but I never forget how human she is. … Dani is just a large heart with limbs. Her empathy, compassion, and friendship is what made her a leader and captain on the team, not her skill. She's the type of girl to console a frustrated teammate, even after winning a state title. I've always been proud of Dani; I've been proud of her skill, proud of her competitive spirit, but I've been most proud of her heart. She's a three-time state champion because of her fiercely competitive spirit, and because of her caring heart. I will miss her next year, but I'll always be proud of her, and I'll always have her back.”

Performance Point: “After I made my putt on Saturday, and my team running onto the green, is always something I'm never going to forget. All the support from them, that's something that will always stick out. … What's funny about it actually is that I grew up golfing with Anika (Dy) and with Nichole Cox, so it's a crazy thing to think because we all did the same golf camp when we were younger. So me and my dad were laughing about it – we said, ‘I guess the camp works out pretty well.’ It's such an amazing thing to accomplish (three championships) with my best friends. We've been talking about it all week, and just bringing up old memories from camp and just stuff like that. It's been a pretty cool couple of days just getting to talk with (Anika) and experiencing this together.”

Mastering the mental game: “The biggest thing for me is treating everything the same. Whether it's a really big international tournament, or it's a regular tournament for high school, treating everything the same and never feeling like I have an advantage over anybody else and just going into it like everybody has a chance to win this. I work with Jason Novetsky, who is a really great mindset coach, and we work on stuff with that all the time – on trying to keep my mind in it, and focused, and not on the future and the outcome. I think that's been a big help for me. … Golf is so day to day. You just have to always remember that anybody can win it, anybody could have the round of their life, to always play every shot the best you can. I think that's what really just keeps me in the moment and helps me out.” 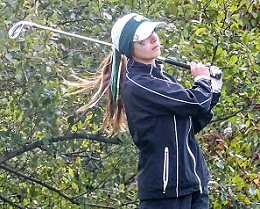 On to the next shot: “I’ve learned how to deal with things that don't go well on the course better now. I wouldn't say I used to panic when things went wrong on the course, but I've learned to really use the mindset that the next shot is so important. If you hit it into a pond or if you hit it into something where you weren't expected to hit it – the rough or in a bunker – you just play that shot, and then move on and try to birdie the next hole. Moving on from something that didn't go as planned is something I'm doing a lot better, and just remembering that it's a game.”

It’s always been golf:  “I've been playing golf my entire life. It's just always stayed that thing that I love, because I never let it turn into a chore. Every time I go out and play, it's fun. If I'm trying to beat myself, or if I'm trying to beat the course … it's just something that's always fun to me. I'm always happy to be out there playing, never felt like I have to go and practice, that I have to go do this. I think that keeping it fun for me has been why it's still my thing. I never go on a golf course and don't want to be there. With my mindset coach, another thing we talk about all the time is you don't have to go play golf; you get to play golf, which is something I keep in my head all the time. I've had the opportunity to go out and play golf all the time, and it's fun for me, and I'm going to take that opportunity and I'm going to keep it fun. Plus, I grew close to a lot of girls in the golf community, so usually when I'm at tournaments, it's with the people that I really like to be around and that have the same goals as me. It just keeps it really fun and light-hearted.”

More than a team: “My golf team is my family, and if they need anything any time, they know they can call me, they can come to me and I'll do anything in my power to support them and be a good captain. If they need swing advice and they want help with it, I'll help them out with it. Or if they need notes from a course that I have, I'll walk them through it or we'll go out and play a round together and I'll give them advice. Even outside of golf too; we're best friends on the golf course, and we're best friends in the hallway. That was a really big thing for me when I became one of the captains last year; we are a team, but I want us to also be a family. I just wanted to have a group of girls that could rely on each other even when we're not playing our sport, outside of school. … I wanted it to be a really friendly, family-like environment, and I think that's what happened this year, which was really exciting for me.”