Dy shot a two-day 141 to best the field at The Meadows at Grand Valley State University by eight strokes, leading off with a first-round 69. Her 141 tied the fourth-lowest 36-hole score in MHSAA Girls Golf Finals history, and she became only the 11th golfer to break 70 for an 18-hole Finals round. West’s team score of 626 was 22 strokes lower than the field and ranked third all-time in Lower Peninsula/Class A Finals history. Next season Dy will play to become only the fourth in MHSAA history to win three Lower Peninsula girls golf individual titles – and she also finished runner-up as a freshman by only a stroke.

Her numbers this entire season were similarly incredible. Dy averaged 69.6 strokes for 18 holes and shot no worse than par in any of her rounds with only two double bogies the entire fall. Outside the high school season, she made the Michigan Women’s Amateur Championship semifinals this summer and played in the United States Golf Association Women’s State Team Championship in New Mexico alongside her sister Anci, a freshman on West’s team this fall who tied for sixth at last weekend’s MHSAA Final. Anika Dy already has committed to continue her golf career at University of Michigan, and she carries a 4.0 grade-point average.

Coach Karl Gagnon said: “She works harder than any golfer I have been around. She will practice at 7 a.m. before school just to make sure she gets her practice time in. And as good a golfer as she is, she is a better person. She is humble and never fails to tell the kids she plays with she enjoyed playing with them. She encourages everyone she plays with. At the same time, she has that competitive fire in her. The first day of state finals, she came off the course so upset with her round. She felt anger she didn’t play better. I asked her what she shot. She gave me her card … 69. I said, ‘Are you kidding?’ But that’s Anika. Always wanting to do better.”

Performance Point: “It’s still kind of a shock. Honestly it was a goal to go there and win, but I still can’t wrap my head around it – especially since it’s our second win as a team in the last three years,” Dy said. “I was on a roll (during the first round). I didn’t really know what I was doing. I just kept going with it. The second day was a different story. I struggled a little more. But that first day was really, really, really fun. (Putting) definitely lowered my score a little bit because my long game wasn’t there to back it up. … (The championships) were all special in their own ways, but this year was maybe a little more special because my sister was on the team, so it was fun to share that experience with her. And doing it a second time around just really lets me know what I’m doing is working. It’s really helped my confidence going through this year and for next season too.”

Ready to represent: “One of our seniors really, really stepped up, Megan Jenkinson. I’m so proud of how she played; those were probably her best two rounds this whole season (Jenkinson tied for ninth). We prepared really well, and we just came together as a team. We were in such a good mindset, and it just worked out in the end. We always like to joke about representing the northern Michigan side of things because we’re so far away, and not many other teams know that we’re up here sometimes. So when we come down, we like to show them what we’ve got and make a run for it.” 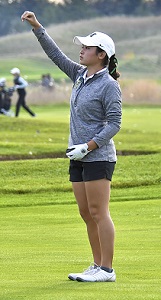 Sister act: “Just growing up together (with Anci) playing golf and everything is really fun, and we never got to actually play on a team before in a competitive setting. So just to be able to do that and experience it for the first time was fun and exciting and new. Neither of (our parents) play golf. I got into it because of my dad, but he only stuck with it for a year and quit, but I kept going with it. It’s funny because people are always like, ‘Neither of your parents golf?’ and I’m like, ‘No, it’s just us two.’ To be honest, I was more interested in the golf carts before I was interested in golf, but eventually my dad got me clubs and I just kept with it because I loved it so much, just competing.”

See a different game: “I just love watching golf, whoever is playing, just because those are the best people, on the TV. And obviously there’s a reason why they’re the best. So you can always learn something from their long game, short game, mental game, whatever it is; those are the best players and you can definitely learn something from any of them. I think I watch to see their strategy and what they do so I can kinda imitate them and see what works for me, because obviously it works for them – so maybe it will help get my game to the next level as well.”

Golf and grades: “My parents are always school first and then golf, so in order for me to do what I love I have to do well in school as well. They’re pretty strict with my grades and school and all of that. They understand though that I’m really busy with golf and school, so they kinda cut me some slack sometimes. I think (golf and academics) go hand in hand. They both teach you discipline and time management, which is important for college because you do also miss a lot of school when you go to tournaments, so I think it’s preparing me well for that college experience.”

PHOTOS: (Top) Traverse City West's Anika Dy watches one of her drives during last weekend's LP Division 1 Final at The Meadows. (Middle) Dy tests the strength of the wind before an approach shot. (Click to see more from HighSchoolSportsScene.com.)