EAST LANSING ‌—‌ ‌Shannon Kennedy is one of the most accomplished high school golfers the state of Michigan has ever seen.

She’s also one heck of a basketball player.

So when she stared down perhaps the most important putt of her high school career Saturday afternoon at the MHSAA Lower Peninsula Division 3 Girls Golf Final, she had just one thing on her mind.

“I got up to that putt and, honestly, it looked like a basketball hoop,” said Kennedy, a senior at Bloomfield Hills Marian. “I was like, ‘There’s no way I’m missing this. I had the feeling it was going in.”

Without a doubt, Kennedy made the birdie putt on the 16th hole, which forced a playoff with Grand Rapids Christian senior Ryann Breslin. Kennedy then went on to defeat Breslin in a one-hole playoff, ripping her tee shot nearly 300 yards and tapping in for a championship-clinching par putt.

The title was Kennedy’s third, tying her with five others for most Lower Peninsula girls golf championships won during a career.

“I love this hole,” said Kennedy, speaking of the 319-yard par-4 first hole at Forest Akers East. “It kind of fits my eye. I planned on drawing it off that tree back there, and that’s exactly what I did.”

In addition to adding to her individual hardware, Kennedy helped her Marian team claim its second-consecutive team championship. The Mustangs shot 312 as a team and had four golfers shoot 82 or better, all finishing among the top 20. 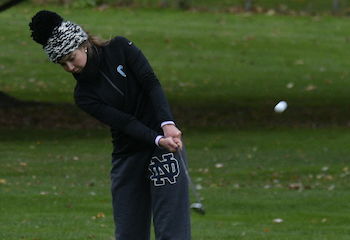 “That’s how you have to win these,” Marian assistant coach Dave Sass said. “You can have a really good player like Shannon Kennedy, but if you don’t have four other supporting cast members, then you’re not going to win it. Everyone did a great job. I’m proud of them.”

Senior Lauren Sass just missed medaling, firing a 79 and finishing 12th overall for Marian. Senior Sarah Kuredjian had an 81, and junior Ashley Carroll was close behind with her round of 82.

Breslin was at or near the top of the leaderboard all day long. She finished with a pair of birdies to card a 70. That gave her a 1-stroke lead in the clubhouse.

But Kennedy had one hole to play. And she made the most of it. Her drive on No. 16 just missed the fairway, and her approach shot missed deep right and landed on the cart path. After receiving relief, she hit a pitch to within 20 feet before sinking the putt.

“It was the best up and down I’ve ever had in my life,” she said.

Macomb Lutheran North posted a team score of 327 to finish runner-up. The Mustangs finished second to Marian at the Catholic High School League championships as well, and struggled to a third-place finish in their region.

“We played great all season, and then at the Regional we had our worst day,” Lutheran North head coach John Bergmann said. “So we bore down this past week and said, ‘You know what, we deserve better than this.’ We put a lot of work in over the last 8-9 days. I’m very happy with their performance today.”

Freshman Lauren Timpf led her team with a 1-under 71. She narrowly missed joining Kennedy and Breslin in the playoff. Sophomore Taylor Elias had a 76, and sophomore Aileen Cosentino and senior Julia Zauel added an 88 and 92, respectively, to cap the scoring for Lutheran North.

Frankenmuth’s Ella Smith also shot a 76 and tied for fifth among individuals. Grosse Ile’s Lily Bargamian and Whitehall’s Karli Vanduinen each shot 77 to tie for seventh overall, and Cranbrook’s Ashley Cong, Powers Catholic’s Jolie Brochu and Ada Forest Hills Eastern’s Hailey Curry all had 78s to round out the top 10.

PHOTOS: (Top) Bloomfield Hills Marian’s Shannon Kennedy putts for the win on the playoff hole at the Division 3 Final on Saturday. (Middle) East Grand Rapids’ Ryann Breslin chips onto the green during the playoff. (Click to see more from HighSchoolSportsScene.com.)