NORWAY — There was no question the individual winner was going to be from Iron Mountain High School at the end of Wednesday's MHSAA Upper Peninsula Division 2 Girls Golf Final.

It was just a matter of which one.

Johnson then became the overall winner by edging Feira on the first playoff hole.

"In my 15 years of coaching, that's the first time I've seen this happen," Iron Mountain coach Don Bianco said. "This was very unique. To have this happen was very special. Both girls played well. Katelynn just had better luck getting out of the sand trap during the playoff hole."

The Mountaineers also were crowned team champions for the first time since 2004 with 421 strokes. They were followed by Ironwood with 458 and Manistique at 466.

"The girls really deserve this," Bianco said. "This is a tough group of kids. They're willing to practice in all conditions. Plus, if they have one bad hole, they move on and grind it out." 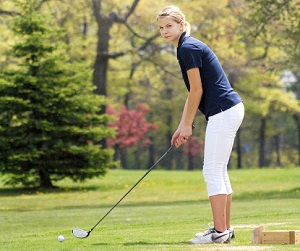 This marked the first U.P. title for Johnson, who also was crowned Mid-Peninsula Conference champion last week and found being in a playoff with her teammate to be quite interesting and nerve-wracking.

"The pressure was on," said Johnson, who will attend Northern Michigan University this fall to major in nursing. "I couldn't have put the ball on the tee at first. I was so nervous. I was just shaking and everybody was watching. I don't think I have ever been that nervous in my life.

“I had a pretty decent drive, then both of us ended up in a sand trap and it took me two shots to get out. It was a relief to get out of there. After that I wasn't shaking anymore."

Once out of the sand trap, Johnson two-putted for the win.

"It was very nerve-wracking," Feira said. "I felt she should win because she's a senior. This the first time I shot under 100. I was happy to break that. I thought the back nine was easier than the front nine. I ended up in sand traps a lot in the front nine.

“As a team, we practiced a lot last week on chipping and putting, which are things I needed to work on. We also played 18 holes a few times and that helped a lot. The weather was better today, too. We didn't have to wear all the layers we did last week."

Feira's thoughts on playing extra rounds at Oak Crest were similar to Bianco's.

"I think coming here a couple times last week enabled the girls to get more comfortable with the course," he said. "Having a strong senior group also helped."

Alyssa Norback of L'Anse placed third at 97. She was followed by Ironwood senior Korrie Trier at 100 and Norway senior Shelby Matonich at 104.