ESCANABA - With golf courses like TimberStone, Greywalls and Sweetgrass already ranked among the best in Michigan, and Sage Run expected to join that list soon, Upper Peninsula golf is becoming increasingly high class.

Players like Mike Nagy, twin brothers Dan and Dave Ellis, Carley Saint-Onge and Avery Rochester have made an impact, and now high school products like Hunter Eichhorn, Bryce Douglas and others are making similar strides.

"I was very impressed. I saw some really good golf," Volbrecht said, surprise obvious in his voice. "If you think it is good, it is way better than you think."

He was particularly impressed by Eichhorn, who went birdie-birdie-bogey-eagle on the last four holes of the front nine en route to a 4-under par medalist round of 67. "Hunter is as good a junior golfer as I've seen," he said, adding the overall performances were stronger than he saw in a Milwaukee area tourney the previous day. 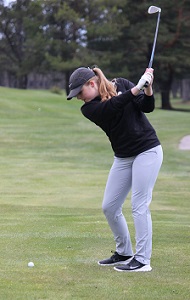 He was amazed to see the level of golf on display since Upper Peninsula weather has not made it easy for golfers to hit the links this spring. "It is a big transition jumping right out of winter and going under par," he said. "I saw some very good golf without there being a really good reason for it (because of tough weather conditions Thursday and all spring)."

Volbrecht also liked the fact many of the players he saw are multiple-sport athletes. Eichhorn was an all-conference basketball marksman, Douglas is a former football player and Kositzky actually was attracted to Wisconsin Lutheran to play football before deciding on golf. "There are some benefits to being well-rounded," said the WLU coach.

Eichhorn, a three-time U.P. Division 3 individual champion, was excited to play with Douglas and Kositzky. "It was a great challenge. I like playing in bigger meets because I know they will push me to play even better. With great competition you've got to lock in a little more," he said, indicating stiffer competition will help prepare him for the challenge of playing at Marquette, which just won the Big East Conference title and graduates only one senior.

Douglas, who beat Eichhorn in one meet last spring and was fourth in the Upper Peninsula Golf Association men's tournament last year, shot  71 on Thursday. "It was really fun competing with them today. It narrows my focus. You want to do better," he said.

"(Eichhorn) is the best player at our level. Of course you want to compare your game to his game." Douglas said. "It will give me an idea what it will be like to play college golf and will get me ready for what is to come."
Douglas plans to play in the UPGA again and will try to qualify for the Michigan Open, the Michigan Amateur and the United States Open.

Kositzky posted a 78 in the chilly, windy conditions and welcomed the chance to test his game against better players.

"Playing with guys like that, you want to try to keep up with them. I tried to stick to my game plan, but they influence you a little bit," he said. "It gives you that focus."

"From the high school standpoint, golf is becoming cool again," he said, indicating a recent decline in girls golf has been a concern. "Getting kids comfortable on the course is a key. Our adult golf population needs to embrace the kids on the course." 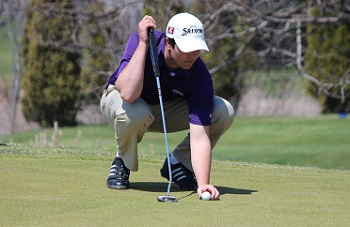 Robinette said players like Nagy (Manistique), Saint Onge and Rochester (both graduates of Marquette) "have paved the way. They are high level, top-tier players."

He said having today's preps see what some of the recent standouts have achieved "gets the competitive nature going for these kids. There is really magnificent talent up here."

He also noted the impact of the Road to the LPGA's Symetra Tour visiting Sweetgrass the past six years as a huge bonus.

Robinette said players like Eichhorn and Douglas can use their length to make the transition to college golf. "(Douglas) will see some stud golfers, but his ceiling is pretty high."

He said Johnson, the reigning U.P. Division 1 girls champion, "has the drive to play beyond high school. She has her golf life mapped out. She can launch the ball with her driver, so now you're talking pars and birdies."

"It doesn't take much to find talent if you care to look," Robinette said of college coaches noticing the quality of players in the Upper Peninsula. "The U.P. is on a lot of people's radar."

Denny Grall retired in 2012 after 39 years at the Escanaba Daily Press and four at the Green Bay Press-Gazette, plus 15 months for WLST radio in Escanaba; he served as the Daily Press sports editor from 1970-80 and 1984-2012, and as interim during the 2016-17 school year. Grall was inducted into the Upper Peninsula Sports Hall of Fame in 2002 and serves as its executive secretary. E-mail him at sportsdenesky@gmail.com with story ideas for the Upper Peninsula.

PHOTOS: (Top) A college-bound trio of Upper Peninsula high school golfers played in the top threesome at Escanaba Country Club on Thursday. They included, from left, John Kositzky of Escanaba, Bryce Douglas of Gladstone and Hunter Eichhorn of Carney-Nadeau. Eichhorn, headed to Marquette University, was medalist with a 4-under-par 67. (Middle) Escanaba High School sophomore Paxton Johnson prepares to hit an iron approach to the 17th green Thursday at Escanaba Country Club. She is the reigning Division 1 Upper Peninsula girls champion and a potential college prospect. (Below) Bryce Douglas of Gladstone places the ball on the 17th green Thursday at Escanaba Country Club. The University of Detroit recruit posted par 71 in the Escanaba Invitational. (Photos by Dennis Grall.)