BRIGHTON – For the third year in a row Saturday, Bloomfield Hills Cranbrook Kingswood stood in the way of East Grand Rapids winning a Division 2 lacrosse championship.

Winners of five straight titles heading into this championship game, the Pioneers had beaten Cranbrook 8-6 in April — so both sides knew what to expect of the rematch at Brighton High School.

Little did the Pioneers know that it wouldn’t go as smoothly as it appeared early in one of the most thrilling Finals in MHSAA lacrosse history.

It took sudden victory overtime but the Cranes, getting a goal by Angelina Wiater with 49.4 seconds left, unseated the champs 17-16 to win their first girls lacrosse title.

“It’s been hard; we had a good friend die this week and we pulled together and came through,’’ said Wiater. “Our goalie (Brigitte Ballard) came through. She was amazing.

“Our goalie threw it to me and coach (Greg Courter) said if you have the legs, go. I went, and I was thinking of passing it. I didn’t see anybody open, and I knew we needed to get one. I didn’t want to make a pass when I didn’t see anyone open. I wrapped around the back and I crease rolled and saw an opening, and I went for it.’’

Scoring early and often, the Pioneers had 11 goals in the first half, but found themselves up only one because of six straight goals by the Cranes midway through the game.

Down seven in the second half, the Cranes held EGR scoreless for 13 minutes and came all the way back, with Sophia Milia’s fifth goal of the game with 2:11 left in regulation tying the score 15-15 on the way overtime.

“Our coach had a deep talk with us at halftime,’’ said Wiater. “We didn’t play our game in the first half.’’

It was Courter’s last game as coach, and he had a heart-to-heart with his team at the break.

“I told my coaches after the halftime talk that we were going to get fired up or we’re going to go in the tank,’’ said Courter. “I was more emotional at halftime than I’ve ever been at any point. Part of me said I’m either going to scare them or (they’ll) respond. Fortunately, they responded.

“Our defense was great and obviously our goalie Brigitte Ballard was outstanding. We started winning draws and possessing the ball more. I knew once we got into a rhythm we could score some points. I’m just so happy for the kids. We needed to have a breakthrough game. East is a phenomenal program. They have a great feeder program and great coaches at any level. We had 17 girls. I didn’t have a full squad. I didn’t have a JV team. I only subbed once or twice the whole game, so our fitness paid off.

Milia’s sixth goal gave the Cranes their first lead since 1-0, as they went up 16-15 with 1:14 left in the first three-minute overtime period.

In the second three-minute OT, EGR’s Emily Roth scored her first goal with 1:32 left to tie the game, 16-16, and send it to a sudden victory period.

The season was far from a breeze for the Pioneers, who finished just third in their conference, the Ottawa-Kent Conference Tier 1, with four losses.

“These two teams are excellent,’’ said Pioneers coach Rich Axtell. “We won the first half, and they won the second half. They could have rolled over, but they kept chipping away. We didn’t have an answer for No. 27 (Isabelle Scane). Most teams don’t. They just played better than us. Both goalies stepped up huge.’’

Cranbrook scored first on a goal by Scane with an assist from Milia. East Grand Rapids responded with a goal by Mary Schumar to tie the score.

Jessica Geiger untied the affair at the 16:50 mark to give the Cranes a 2-1 lead before Grace Ruppert tied it again seconds later. 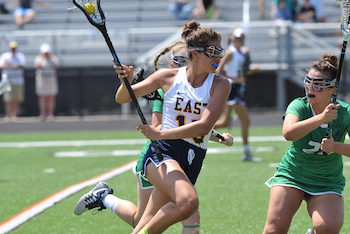 O’Connell’s second goal with an assist from Olivia Brown gave the defending champs a 5-3 lead.

Seconds later Lindsay Duca got her first goal, and the Pioneers were up 6-3 with 8:18 left in the first half.

The Pioneers kept rolling as Schumar got her second goal for a 7-3 lead at the 7:04 mark.

Delaney Langdon ended the Pioneers’ run with a goal for the Cranes to trim the deficit to 7-4.

Milia ended the drought for the Cranes as her goal made it 10-5.

EGR ended the scoring in the first half with a half-second left on a goal by Audrey Whiteside to make it 11-5.

Schumar (fourth) and Scane (third) traded goals to start the second half to make it 12-6. Schumar’s fifth gave EGR a 13-6 lead as they started pulling away. But back-to-back goals by Milia for the Cranes reduced the deficit to 13-8.

Scane scored her fourth goal and Axtell had to call a timeout as the lead shrunk to 13-9. Courtney Paulus kept the momentum going, scoring to make it a 13-10 game and give the Pioneers some anxiety.

Scane made the play of the game when she stole a pass and streaked 65 yards for her fifth goal to make it 13-11 with the Cranes’ fifth straight score.

Milia scored her fourth goal with 9:23 left, and suddenly only a goal separated the two teams.

Whiteside finally ended the 13 minute drought for the Pioneers with a goal to make it 14-12.

Scane’s sixth kept the pressure on the defending champs, reducing the lead to 14-13.

Brown added a goal to her assists as EGR extended its lead to 15-13. But Georgia Hinnant responded for the Cranes to make it a one-goal game again and set up the run that sent the game to overtime.