Already Michigan’s all-time leading high school goal-scorer with a season to play, Scane finished her junior year with seven goals – tying for second most in an MHSAA Final – as Cranbrook Kingswood won in sudden victory 17-16 over reigning champion East Grand Rapids in the Division 2 Final on June 10. Leading the Cranes to their first MHSAA title in the sport, with one of her goals coming in overtime, earned Scane the Michigan Army National Guard “Performance of the Week” for June 5-11.

Scane, considered one of the top players in the nation for her age group, finished this spring with 146 goals and 37 assists – the 146 goals were the second most for one season, and her 183 total points came in third in MHSAA history. After three varsity seasons, Scane has 365 goals and 93 assists for 458 career points – she holds the career goals record by 89 and needs only two more points next season to tie the career record in that category.

Cranbrook Kingswood had fallen to East Grand Rapids in the 2015 and 2016 Division 2 Finals, and Saturday’s game also was the last for Cranes coach Greg Courter – making the victory that much sweeter. Scane is the second sibling in her family to win an MHSAA lacrosse title, following older brother James who starred at Birmingham Brother Rice and now plays at Robert Morris University (Pa.) and was a major influence growing up. Also a 4.0 student, Isabelle is committed to sign next school year with national power Northwestern University, where she’s considering majoring in pre-med. And here’s a final fun fact: Like many athletes, Scane has highlights posted on the web service hudl; but unlike probably anyone else, she’s also posted a “Me Missing Shots” collection – a light-hearted sign of her humble perspective as she drives to improve her already-substantial game.

Coach Greg Courter said: “Prior to the season, Inside Lacrosse Magazine had Isabelle rated as the number 14 junior in the country. Personally, I think that that rating is low. Were she playing back east, she would be higher. I have coached 10 girls in my career who went on to become Division I All-Americans. Isabelle is already a better and more complete player than any of them. She is a once-in-a-career talent (for a coach). I have no doubt she will be on the U.S. national team in a few years.”

Performance Point: “It was a long hot game. We were out on the turf and it was 90 degrees and we’re a small team with only a couple of subs, so it got pretty exhausting,” Scane said of the Final, which saw the Cranes trailing 12-5 early in the second half. “It kept us going that it was our last time playing this season, and it pushed us through the exhaustion. … I think it’s awesome. Individual awards are nice, but when it comes down to it, being able to get that (win), to get there and get there as a group when we’ve been so close the last few years, and to finish … I’d say it was probably the most exciting game I’d been part of. To come back and win the state championship, coming back from seven goals down to end up winning it – it was an insane back-and-forth game.”

Sending off Coach with a win: “At least for me and a couple other girls, that was the most exciting part about it. He’s been an amazing coach the last three years. We always believed we could do it, but unfortunately we weren’t able to win for him the last few years. It was awesome to finish off his coaching career with the thing we’ve been pushing toward.” 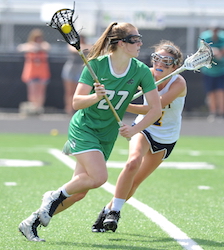 Growing in the game: “Freshman year, I was a younger player on the team and being new to the program, I wasn’t as physically and mentally tough as I am now. I’ve gotten used to the pressure, and I’m able to keep my head in games, which as a freshman I wasn’t able to do. I think the mixture of experience and my coach, he’s always been there to kinda help me figure out how to keep my head in the game mentally, keep working when things aren’t looking as great as they should. The way he’s coached us, the way we practice, he’s done a nice job of it.”

No rush: “We had only two seniors this year, and I’d love to keep working with the team we have now, keep pushing for another state championship. I’m committed to go play in college, and I would like to continue playing at a higher level. (But) I definitely need to finish off high school – I’d like to keep how well we’re doing, get a state championship for the girls in our class and the girls below, but I also have new stuff coming and I want to keep working toward that so I do well there. I’ve always been told not to rush through high school, so I want to be sure to finish off one last year at Cranbrook.”

Every week during the 2016-17 school year, Second Half and the Michigan Army National Guard will recognize a “Performance of the Week" from among the MHSAA's 750 member high schools.

PHOTO: (Top) Cranbrook Kingswood's Isabelle Scane works to find an opening during the Division 2 championship game against East Grand Rapids. (Middle) Scane closes in on a possible shot; she scored seven goals in the win.