BRIGHTON – This was supposed to be a season of transition for the East Grand Rapids girls lacrosse program.

Gone were 12 seniors and seven starters from the team that last year won the program’s record fourth straight Division 2 championship.

And then the Pioneers lost three straight games as April turned to May, and four of six games total during that string – or one fewer defeat than they’d suffered the last four seasons combined.

And yet, Saturday’s season ending was the same – a 13-11 win over Bloomfield Hills Cranbrook Kingswood at Brighton that extended the MHSAA-best championship streak to five straight.

“Our motto was kinda, “Rebuilding? More like reloading,’” Pioneers junior attack Lindsay Duca said. “We graduated seven-plus starters last year, and everyone’s asking me, ‘Oh, are you going to win states?’ And I’m like, ‘We’ll be prepared for it, but who knows.”

The Pioneers knew enough, whether it be how to restack the lineup or come back with one of the most dominant 20-minute runs in MHSAA Lacrosse Finals history.

Cranbrook Kingswood (17-7), seeking its first championship in the sport and last season’s runner-up after falling 19-6 in the season finale, scored this game’s first three goals and took a 5-2 lead into the 15th minute.

But Pioneers freshman attack Mary Schumar – playing only her sixth varsity game – scored her first of six goals Saturday off a Duca assist with 10 minutes to go in the first half. By the time senior attack Julia Surman scored 6:40 into the second, East Grand Rapids (17-4) had flipped the advantage with a 7-1 run. That turned into an 11-2 streak when Schumar scored her final goal to give her team a 13-7 lead with 6:43 to play.

“Basically, our team needs to settle down and start picking them apart offensively, and that’s something we’ve been working on all season,” East Grand Rapids coach Rich Axtell said. “And they were just patient and got layups, and that’s what we have to look for.”

Duca, also Schumar’s neighbor, had seven assists during the 11-goal streak and eight assists total – which were second-most for an MHSAA Final behind Mackenzie Lawler’s nine for Okemos in 2010, and tied for fourth-most for any game in MHSAA history. 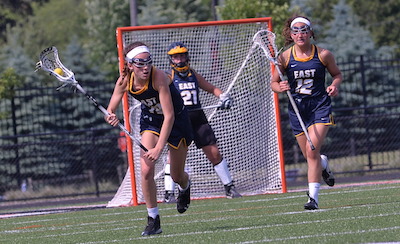 “They play a really nice zone defense which is designed to stop an individual dodger like Isabelle, but she still managed to find some seams and dodge to the cage,” Cranes coach Greg Courter said. “She’s a fierce competitor. I’m not surprised that she beat some triple teams and found a way to score.

“We’re still pretty young," he added. "The heart of our team is sophomores right now. We’re hoping this becomes a common event with a different outcome at some point.”

But East Grand Rapids also should return most of this group next season – only six players graduate, and Surman the only one who scored Saturday.

The Pioneers who come back in 2017 will be another battle-tested group.

“Once we started assisting each other and started playing selflessly, it all came together,” Duca said. “When you have your streak going, it’s hard to (not) let your guard down. But I think that’s one of the strengths of this program. Even if we let our guard down, we always come back and get the job done.”