ROCKFORD – East Grand Rapids senior captain Charlotte Hooker was determined to make it back and play at least one game of her senior lacrosse season.

Hooker reached that goal and then some as she came back from injury in time to play in both the MHSAA Semifinal and Saturday’s Division 2 lacrosse championship game against Okemos.

Hooker scored goals in both games, including one in the title match to help the Pioneers defeat Okemos 11-7 to win a third consecutive MHSAA championship.

“This is very special because I’m a senior and a captain, and this was the final game of my high school career,” Hooker said. “A lot of people didn’t think I would make it back, but I was determined.”

Hooker suffered a torn labrum and underwent surgery in February, leading to months of physical therapy. Doctors told her she would not be able to play her senior year.

“I was not planning on making it back, but physical therapy went so well that I knew I had a chance to make it back in time,” Hooker said. “I really wanted to make it back and play at least one game of my senior season.”

Hooker returned in time to help the Pioneers defeat Bloomfield Hills Cranbrook-Kingswood in the Wednesday Semifinal and then took the field against Okemos in a rematch of last season’s Semifinal and the 2012 Division 2 championship game.

With the Final tied 6-6 midway through the second half, Hooker scored as part of a four-goal run that gave East Grand Rapids control up 10-6.

While many doubted Hooker’s ability to make it back from injury, many also doubted they would see the Pioneers in the Finals again after graduating 12 starters from last year’s team.

“This one is very special because no one thought our team was this strong,” Hooker said. “It was real special to prove to everyone that we could do it again.”

Okemos suffered from the injury bug in the opening minutes Saturday. Sophomore standout Kendall Luberto suffered a severe ankle injury and was lost for the game. She entered the game as one of Okemos’ top offensive players with 48 goals and 30 assists this spring.

“I think our girls played tough,” Okemos coach Donny Luberto said. “One of our starters went down in the first three minutes of the game, and that threw us out a bit. But the girls played tough. I knew they would keep fighting and keep playing tough.” 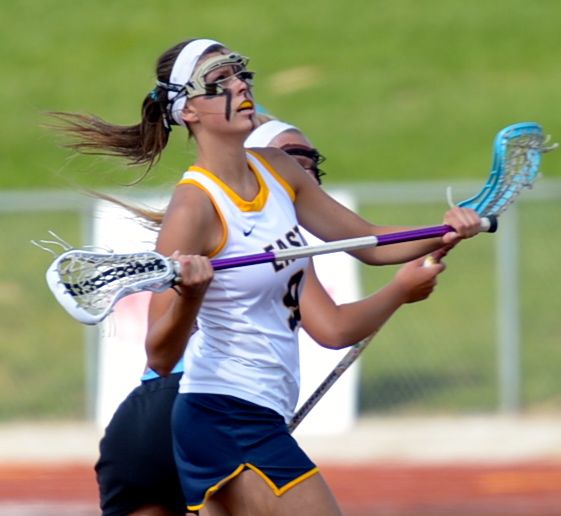 Okemos battled the entire 50 minutes while attempting to become the first Michigan high school team to defeat East Grand Rapids since 2010. Okemos scored the first two goals before the Pioneers came back to tie the match 2-2.

Okemos again battled back and went up 4-2 before East Grand Rapids closed out the first half with four consecutive goals to take a 6-4 lead.

“They (Okemos) are a class program,” East Grand Rapids coach Rich Axtell said. “They have won two state titles, and we knew they would be tough."

Senior Meggan Loyd scored three of East Grand Rapids’ first-half goals and led the Pioneers with four for the game. For Loyd, the title was the fourth MHSAA championship she has won at EGR as she had been on the previous two lacrosse title teams and also won one with the Pioneers volleyball team.

“I think this one means the most,” Loyd said. “Being a senior and people not expecting us to win it this year, it was also the toughest. We had to work harder to get this one. All of our playoff games were close. We beat Caledonia by one goal in the Regional and Cranbrook by two in the Semifinals.”

Junior Liza Elder came into the game as the offensive leader of the Pioneers with 78 goals and 48 assists. She added three goals and will be one of the leaders next season as the Pioneers look to win a fourth straight championship.

“We had a very young team this year,” Elder said. “We knew we had to work extra hard to make it back. We started working out in the weight room back in September to get ready for this year, and we just kept going. We played some real tough games this year but nobody ever gave up.”

PHOTOS: (Top) East Grand Rapids and Okemos players contend for the ball during the MHSAA Division 2 Final at Rockford. (Middle) The Pioneers' Liza Elder works for position as she awaits a pass Saturday.