BELLAIRE — Marquette and Traverse City Central’s girls ski teams have stood toe to toe in the biggest meets of the season.

Central may have edged Marquette by just three points in the Regional two weeks ago, but Marquette got payback at Monday’s MHSAA Division 1 Finals at Schuss Mountain, slipping past the Trojans 51-55 to win their fourth straight championship.

“Honestly, it came down to that very last run,” said Marquette girls ski coach Dan Menze. “I told the girls that they had to lay it all out. There was nothing else to do than go for it and they did, and they ended up moving up from where they were after the first run of GS and were able to squeak by. So it was awesome.”

“We were kind of down in the dumps on our first run on GS,” said Johnson, who was also second in the slalom (1:03.94). “We were thinking maybe TC Central would take it, but then we really turned it on in the second run. I’m really happy we got to take it.”

Marquette held a 24-26 lead over the Trojans after the slalom, helped by the top two finishers in Ainsley Kirk and Johnson, both juniors. Kirk repeated as the girls slalom champion, finishing in 1:03.69.

“It was really an honor,” said Kirk, who added a fourth-place finish in giant slalom (49.82). “There’s so many great people out here. I’m thankful for Dan for coaching us all this year. It was a great time. I thought we did pretty well. We had some scares in there after the first GS run. We definitely picked it up for the second run.” 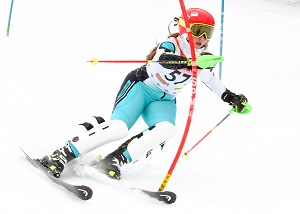 “We knew it was going to be really close,” said Menze. “I don’t know if I thought it was going to be as close as it was, but they skied phenomenal. (Traverse City Central) stacked pretty much all six of their skiers in the top 10 or 15 skiers. That’s incredible. We were lucky to come away with the victory today. I won’t lie. I think we skied really well. The girls did what they needed to do. Definitely some nerves early in the day, but I think that they skied well enough. Lot of hard work this year. It’s been a tough season this year with the weather. A lot of cancellations. They put in the time. They deserve it.”

Traverse City West’s Hannah Schramski finished as the giant slalom champion with a time of 49.27. Schramski, who was also fifth in the slalom (1:07.43), led West’s third-place finish overall with 87 points.

Traverse City Central had brilliant performances in both disciplines to put itself in position to steal the team championship from the Redettes. Emma Dutmers led four Trojans finishers in the top 11 of the slalom with a fourth-place time of 1:06.91. Sarah Beattie was sixth (1:07.61), Elle Craven took eighth (1:07.88) and Maddy Craven finished 11th (1:08.52).

Brynn Rowell had the best giant slalom finish for the Trojans, coming in sixth in 50.73. Maddy Cox added a seventh (50.92), Elle Craven was ninth (51.41) and Dutmers was 13th (51.92), but it just wasn’t enough to hold off the two-time reigning Division 1 champions, who had an inkling they would be holding the first-place trophy again after their strong finish to the second half of the day.