EAST LANSING – Although his team found itself in an unfamiliar situation Friday afternoon, David Dwaihy had an idea how at least the first part might play out.

As Grosse Pointe Woods University Liggett readied for its first tie-breaker shootout of this spring – and in the season’s final game – Dwaihy, the eighth-year coach, decided to simply ask his players to raise their hands if they wanted one of the penalty kicks.

“I had a few in mind who I wanted to take the shot,” Dwaihy said. “I ended up just saying raise your hand if you want one. The hands flew up, and the freshmen all raised their hands.”

And then the most “courageous and bold” of them all finished the Knights’ first MHSAA championship run since she was getting ready to start kindergarten.

Freshman defender Kate Birgbauer was her team’s fourth and final shooter and put her attempt just past the crossbar into the top of the net to give Liggett a 4-2 advantage in the shootout and a 1-0 win over Montrose in the Division 4 championship game at DeMartin Stadium.

“I love shootouts. I like the pressure,” Birgbauer said. “I actually turned to my friend Izzy (Brusilow, the team’s second-leading scorer this season) and I was like, ‘Are you 100 percent sure you’re going to make this?’ She was like, ‘Oh, I’m not sure,’ so I was like, I’ll take it. So I stepped up and shot it.”

“They’re courageous and a very bold, confident group – especially our center back who scored the winner, Katie Birgbauer,” Dwaihy added. “She wanted it.”

Liggett (19-2-1) won its fifth straight District title to start this run and repeated as Regional champion as well, but hadn’t played in an MHSAA championship game since winning Division 4 in 2005.

Despite their relative youth – the Knights had only three seniors this season – a number of key players gained experience during last season’s run. But they still hadn’t been pushed to this brink during a season in which they gave up only 14 goals.

Montrose (23-4-1), meanwhile, was playing in its first MHSAA championship game in girls soccer after winning its first Regional title, and ended this season giving up only nine goals.

The more upperclassmen-laden Rams went on the attack immediately. Sophomore Remington Hobson broke away at 28:04 in the first half, but Liggett junior keeper Kara Francis jumped in front to deflect the drive away from the goal. Senior Ellory Barnette sent a header over the net off a corner with 14:04 to go in the half, and Liggett sophomore defender Teagan Cornell headed away another Montrose shot midway through the second half that would have found the net had she not dropped back to cover the corner. 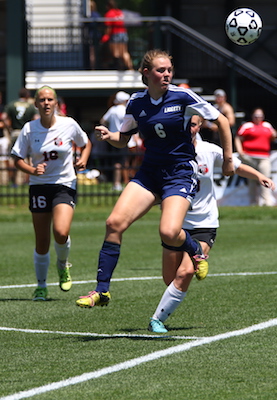 The shot differential wasn’t much during regulation, with Montrose tallying nine to Liggett’s eight. But the Rams had 11 corner kicks in the game to Liggett’s one, giving them better opportunities to attack.

“That’s turned out to be our bread and butter this year, set pieces, corners, and we came close,” Montrose coach Jason Perrin said. “If you get 11 of them, you’ve got to put one in.

"But they’re very similar to us – they get 10 girls behind the ball, they clog up the passing lanes. We do that. It was kinda like playing ourselves, a little bit.”

The game appeared over before the shootout, but only for a minute, when a Liggett throw-in landed in the Montrose net with 5:09 to go in the second period of overtime – but the goal was called off because it didn’t touch a player from either team on the way.

“I think that lit a fire in our hearts a bit,” Birgbauer said. “We got mad, and we came back.”

Montrose had more experience in shootouts – they’d gone 1-1 previously, with a win that way over No. 2 Elk Rapids in the Regional Final. But Liggett apparently was plenty prepared despite a lack of shootout experience.

Liggett’s Francis and Montrose senior keeper Alexis Rush both made four saves while controlling play in front of their respective nets. Rush is one of eight seniors who will graduate from the Rams’ most successful team.

“We had a good core coming back. We won 17 games (last season). But we hadn’t won a District since 2001. So it’s hard to dream too much beyond the District or Regional level,” Perrin said. “But this team grew with confidence. Really, once we beat (Saginaw) Nouvel in the District Finals, I could just tell we had the mindset to go as far as they wanted, and they put on a good run.”