EAST LANSING – Olivia DeConinck had a feeling Friday after she strode from her defensive position to join the Bloomfield Hills Marian attack on a corner kick.

The Mustangs senior and Bucknell soccer signee didn’t make the run she typically would for a header, and that left her in perfect position to score the goal that put her team on track for a fourth-straight MHSAA Division 2 Girls Soccer Finals title.

“I guess it was just instinct,” she said. “I’m not really sure, my body just kind of took over. I knew someone needed to be there, so I got there.”

Marian’s 3-0 victory gave the program its ninth title overall, as its hold on Division 2 soccer in the state has lasted since 2017 and even spanned a canceled season. This year’s team finished 13-3-1 and did not allow a goal throughout the postseason, outscoring its opponents 26-0 over six matches.

“We win because we have really good players,” Marian coach Barry Brodsky said. “They’re smart. They’re in the classroom very smart, and that makes coaching a pleasure.”

DeConinck’s instinctive play didn’t lead to the winning goal, nor did it come late enough in the game to be considered a game-sealer. But in making the score 2-0 early in the second half, it may have been the goal that took the most wind out of a Spring Lake team that felt very in the game up until that point.

“I think the 1-0 lead, it still kind of got in their heads that they were just one goal away, one opportunity away from tying it up and getting back in the game,” DeConinck said. “I think once we put that second in there, we kind of proved our dominance and it lifted our spirits up.” 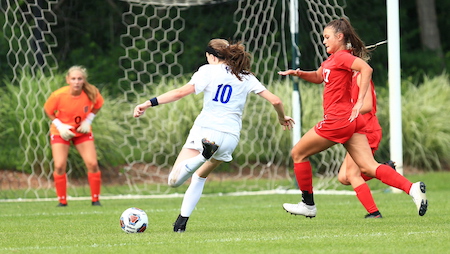 The goal came on what DeConinck described as a shot, but one she hoped one of her teammates could finish. She floated the ball to the opposite post, and it made its way into the net on its own. The official and the linesman conferred after the goal to make sure an offside Marian player had not had an impact on the play, and decided the goal stood.

“She’s been a full-time player since her freshman year, she’s going to Bucknell to play – she's a stud,” Brodsky said. “You get some studs on your team and you’re going to have a good team, and she’s one of them. She won’t like me saying it, but her two sisters before her were the same. I’ve had a DeConinck on the team since 2014, and this was the last one. They’re special. She’s a stud player, and a stud athlete, and a stud student, and a stud person.”

Ervin opened the scoring less than five minutes into the game, finishing after a goalmouth scramble. She had another chance midway through the first half, as she was left alone in the box for a header, but Spring Lake keeper Jessica Stewart was there to make the save.

Ervin, a freshman, was the team’s leading scorer on the season with 24 goals, and she’s one of 17 players who could return next season. So, while the Mustangs will graduate seven senior starters, there’s plenty of firepower remaining.

“Coming in at the very beginning, I did not know what to expect,” Ervin said. “I just knew we had a lot of people coming back with these seniors who had won two championships already, and I didn’t know what role I was going to play. Right when I came in, all of them were so accepting, and I was like, ‘Whoa, I am totally part of this team.’ We had our first couple games, and I realized I had to play a big role. I had to step up, even as a freshman.”

Spring Lake (15-4-2), which was making its first Finals appearance, had its own opportunities in the half, mostly off the foot of junior forward Meah Bajt. She powered one off the crossbar not long after Ervin’s goal and created her own breakaway chance near the midpoint of the half, but her shot spun wide of the Marian net.

The second half, however, was all Marian, as Mustangs keeper Izabel Toma had to make just one save in the game, and it came in the first half. Spring Lake’s Stewart, meanwhile, made eight stops.

“It was a crazy, crazy ride,” Spring Lake coach Becky May said. “I just threw a bunch of kids out there – they were in middle school last year – and now they’re playing on this big stage. You could just tell they were young, and there were mistakes made that were young mistakes, and we’ll work on them. But they have a ton of heart, and we got farther than anybody ever thought we would.”

PHOTOS: (Top) Marian's Emily Rassel (17) considers her next move Friday while Spring Lake's Ryann Gilchrist defends. (Middle) The Mustangs' Elle Ervin (10) winds up for a shot with the Lakers' Kate Lewkowski (17) in pursuit.