WILLIAMSTON – Usually, goals scored during the final minute of a half are considered backbreakers.

But there might have to be new terminology for what Bloomfield Hills Marian’s girls soccer team did in the final minute of the first half of Saturday’s Division 2 Final at Williamston High School.

One backbreaking goal wasn’t enough for Marian, which put its offensive firepower on full display by scoring two over the final 58 seconds of the first half to take a two-goal lead into halftime against Grand Rapids Forest Hills Northern.

That proved to be the big momentum shift, as the Mustangs won their second MHSAA title in a row and seventh since 2003 with a 4-2 victory in what also was a rematch of last season’s championship game.

“Those were dynamite goals,” Marian head coach Barry Brodsky said. “To come back against us when we are up two is pretty difficult.”

Marian didn’t take long to get on the board, taking a 1-0 lead less than four minutes into the game on a goal by sophomore Chloe Aberlarde. She took a pass from Claudia Schilling and found herself alone in front of the Forest Hills Northern goal, burying the chance inside the far post.

Forest Hills Northern had an answer, tying the game at 1-1 with 14:02 left in the first half on a goal by Elyse DeSchryver, who fired a perfect shot from 30 yards out underneath the crossbar and into the net.

Forest Hills Northern appeared to be in good shape to go into halftime tied, until the Marian magic struck.

First, junior Jansen Eichenlaub got free down the right side of the field, dribbled towards the center of the goal and made no mistake, beating the keeper to make it 2-1 Mustangs with 58 seconds left before the break. 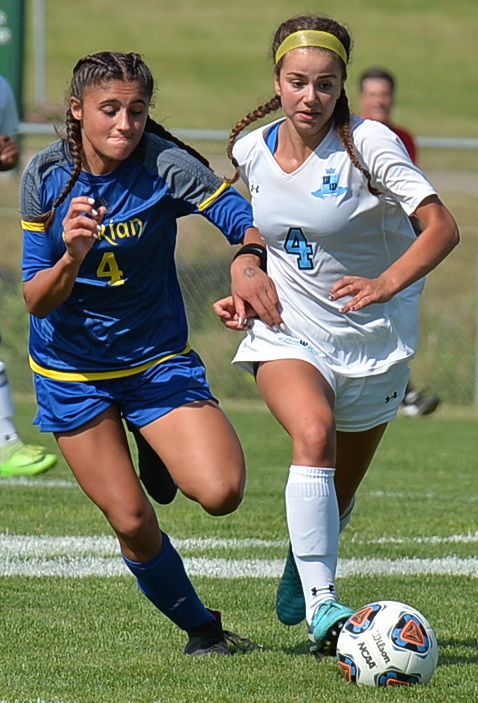 Then, with just 8.5 seconds remaining, senior Annie Bruce fired home a shot to make it 3-1 Marian.

Eichenlaub flicked a service into the box to Bruce’s feet to create the scoring opportunity.

Obviously, Forest Hills Northern was the opposite of pumped up going into halftime.

“The girls were tired, and we were hoping to get into halftime and regroup a little bit,” Forest Hills Northern head coach Daniel Siminski said. “They got a lot of momentum there, and it’s hard to dig yourself out of a hole like that against a team like Marian.”

The Mustangs scored to make it 4-1 with 32:13 left in the game on another goal by Bruce, who forcefully volleyed home a service into the box on a corner kick by Schilling.

Forest Hills Northern cut Marian’s lead to 4-2 with 29:10 remaining on another goal by DeSchryver, who got off a shot with her left foot from outside the box that once again went under the crossbar.

Marian completed its second consecutive unbeaten season, going 22-0-1 this spring after finishing 24-0 in 2017.

The Mustangs will enter the 2019 season on a 47-game unbeaten streak, with their last loss to Pontiac Notre Dame Prep in a 2016 Semifinal.

“It’s pretty surreal,” Bruce said. “Usually we just try and stay together, and that’s exactly what we did. It was a team effort.”

It was the third straight loss in the championship game to Oakland County opponents for Forest Hills Northern (19-5-0), which fell to Pontiac Notre Dame Prep in 2016 and Marian in 2017.

VIDEO: Annie Bruce scored twice for Bloomfield Hills Marian – the first goal coming in the closing seconds of the first half.