The last time Bloomfield Hills Marian was in the Division 2 girls soccer championship game in 2014, Deconinck as a freshman scored its lone goal in a 2-1 loss to Richland Gull Lake.

Now a senior who made a return trip with Marian to Williamston for the 2017 title game, Deconinck heard Marian coach Barry Brodsky remind her of that goal as Marian trailed Grand Rapids Forest Hills Northern 1-0 at halftime.

“We both said, ‘That’s your goal down there,’” Brodsky said.

In her last high school game, it certainly was Deconinck’s goal, as she scored twice during the second half to lift Marian to a 2-1 win and its sixth MHSAA championship since 2003.

This title actually ended a five-year drought that was long by Marian’s standards.

Brodsky also said of those six championships, this was the first time a team of his had rallied in the title game.

After Marian dominated the scoring chances and play for most of the half, Forest Hills Northern stunned the Mustangs by taking a 1-0 lead with 15:59 left in the first half on a goal by freshman Addie Brown. She got loose just outside the box and fired a perfect shot that hit the bottom of the crossbar and went in.

Marian finally capitalized on a chance 1:15 into the second half, tying the game on Deconinck’s first goal, blasted home from point-blank range after another scoring chance hit the crossbar.

Deconinck struck again with 20:07 remaining, taking a pass in the middle of the box from freshman teammate Anna Leonard and fighting off a couple of defenders to chip a shot into the net and give Marian a 2-1 lead. 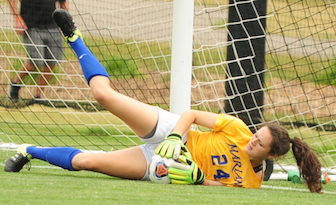 “I thought the first half of the game was some of the best soccer our team played all season,” said Deconinck, one of just six seniors on Marian’s roster. “Going into halftime, the seniors and captains were trying to keep everyone’s heads up. We were really proud of how we were playing. We were a touch off. To come back in the second half and play so well to get our team this victory is unbelievable.”

Marian, which hadn’t given up a goal in the MHSAA Tournament before Brown’s first-half tally for Forest Hills Northern, didn’t allow a serious scoring chance the rest of the way.

“They are very deep, and with a lot of bodies they can rotate,” Forest Hills Northern coach Daniel Siminski said. “They kind of wore us down a bit, and gaps opened up.”

It was the second straight Finals loss for Forest Hills Northern (20-1-4), which fell in last year’s to Pontiac Notre Dame Prep in a shootout (2-1).

“You can’t get too upset when you go undefeated and your first loss is in the state finals,” Siminski said. “That was a helluva game. They kind of wore us down in the second half. If you are going to lose, you lose to the best team. They played better than us today, and they earned it. They deserve it.”