MIDDLEVILLE – When talking about perennial girls soccer powerhouses in the Grand Rapids area, Middleville Thornapple Kellogg might not be the first that comes to mind.

However, the rural school located south of the big city is beginning to make a name for itself on the pitch.

Before that current three-year run in conference play, Middleville T-K had won only one conference title in school history.

The Trojans enter District play this afternoon with a sparkling 15-2-1 record and ranked No. 9 in Division 2.

“I don’t think we’ll ever get the publicity other teams do, but that’s OK,” seventh-year Trojans coach Joel Strickland said. “We are comfortable with who we are and I think we’re starting to get recognized a little, but maybe as not as much as I think they deserve.”

While winning conference titles has been satisfying, Strickland said postseason success is the key to gaining recognition.

“To win three in a row has been huge, but the next goal is we have to do some damage in the postseason to earn that respect,” he said. “We haven’t won a District title yet. That’s the next step for us.”

The Trojans will face a challenge in their District opener as they host No. 5 Richland Gull Lake, which won three straight MHSAA Division 2 Finals from 2013-15.

This year’s T-K squad includes five talented seniors, four who have committed to play at the college level, and they are confident in their abilities to pull off the upset.

“We would love to win Districts, and as a senior this is my last chance,” said Middleville T-K senior keeper Maddie Hutchins, who helped her team post 12 shutouts this season.

“No one is expecting us to win this game, but I feel like we have a real chance. It would be amazing if we could knock them out in the first round of Districts. I feel like if we’re going to do it, then this is the year. We have the talent, and as long as we play together then I think we’re pretty unstoppable. Don’t underestimate us.”

Another senior, Allexus Barnes, said winning in a District would help in their quest to gain more respect in the area.

“We’ve really grown as a team this year and we’re getting our name out there,” she said. “We’re showing people how strong we are. We have the conference titles, but I think we’re ready for that next step and I hope we can do it this year.”

The Trojans opened the season with a 4-0 loss to Grandville, but since have been on a tear. They’ve allowed only five more goals after those first four, bolstered by the play of Hutchins in net and an improved defense.

After graduating 10 from a year ago, including standout keeper Aly Miller and seven other starters, it took them a while to create their own identity.

“The first game was a little rough, but I think a lot of it was figuring out the communication issues that we may have had because we lost of a lot of senior defenders from last year,” Hutchins said. “After that, we’ve really stepped up and played as a unit and we’ve improved drastically. We’re playing really well in the back right now.” 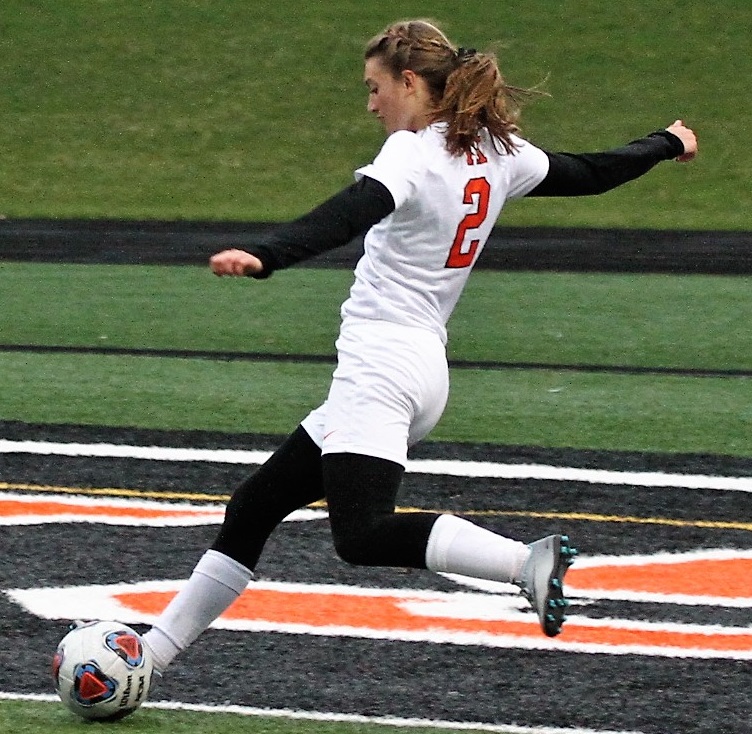 Other senior contributors have been forward Alyvia Thorne and defenders Taylor Pratt and Breana Bouchard.

Strickland expresses the importance of being well-rounded individuals who come together for the betterment of the team and the community.

“It’s about the team concept,” he said. “Understanding that it’s not about any individual. It’s about doing it together and doing it the right way. Just making sure it is bigger than just soccer. Doing well in the classroom, integrity and sportsmanship are big parts of the foundation of who we are as a program, and that winning comes with their hard work and putting in the effort out of the season.”

Many of the past and present players have competed together in the local travel Thornapple Area Soccer Club. It has become an avenue for girls to develop and hone their skills.

“That’s been a big part of our success as well,” Strickland said. “It’s an affordable club for kids who can’t afford to play at Midwest United or clubs like that. That has helped us, but this year’s team is a collaboration from all over.”

Many of the girls on the roster also play multiple sports.

“Being a smaller school, you need to have multi-sport athletes and I think that also helps them,” Strickland said. “It helps them work on different concepts. and they don’t get burned out in soccer. Having a break and playing something different is a good thing.”

A close-knit bond also has enabled the team to enjoy the experience.

“I think our camaraderie is awesome, and that’s the best part of our team,” Barnes said. “We all mesh really well together, and it has helped us a lot and brought us success.”