So many details of Pontiac Notre Dame Prep’s first girls soccer championship run were memorable this spring, it’s sure to not be quickly forgotten in a community that’s had its share of sports success over the years.

Start with the series of tournament opponents the Fighting Irish had to conquer on the way to the Division 2 Final at Michigan State University – arguably the toughest postseason path of any team in any division with No. 1 DeWitt, No. 4 Bloomfield Hills Marian, No. 8 Warren Regina and No. 14 Fenton standing in the way.

And it all finished with a championship game filled with unexpected and unlikely heroics – but just the right mix to give Notre Dame Prep a 2-1 win over Grand Rapids Forest Hills Northern at DeMartin Stadium.

The Applebee’s Team of the Month for June is continuing to relish an experience that's included the return of alumni to support the team in East Lansing and continued congratulations for the latest power to ascend from Oakland County's accomplished soccer community.

“It’s hard to maintain it, especially in this area; getting out of the District is a challenge in itself,” said coach Jim Stachura, who finished his seventh season with the girls team and was part of the staff when Troy’s boys won Division 1 in 2003. “But there’s an expectation to win now that wasn’t there in the past. The first year we made the Final (in 2013, which ended with a loss in Division 3 to Grand Rapids South Christian), it was very much a learning process, not just for the girls, but for the staff. I believe you have to learn to win before you go and win, and we’re expecting to stay up at that level.”

The Fighting Irish closed this spring with a 21-1-3 record after entering the postseason among the favorites with the No. 3 ranking in the final coaches association Division 2 regular-season poll.

They had opened the season with ties against Flint Powers Catholic (the eventual Division 3 runner-up) and Madison Heights Bishop Foley, and the lone loss came 1-0 to Marian in Detroit Catholic League play.

But that defeat to the five-time MHSAA champion Mustangs – who Notre Dame Prep would see again in a Division 2 Semifinal – proved the key to this season’s championship step.

“We looked back right away when the (postseason) draw was made, and we knew it was a really tough draw. But I told them we’d take it one day at a time, and the thing that set the wheels in motion was the loss to Marian in the league,” Stachura said. “We played well that game, and for the first time since I’ve been at NDP, we put it to them. The girls were sitting kinda somber after the game, and I said it was nothing to be ashamed of; from there on … we wanted to get a game against them, and we just started rolling.

“Things fell into place, but I really think we earned it this year. We played everybody. From the start of the season to the end of the season, we were up to the task for everybody except for one day.”

That loss in addition to the two early ties showed Stachura a lot about his leaders this spring – the team could’ve chosen to quit, but did not. But he also saw something promising in how his team won games despite missing players here and there with injuries and illnesses, and “because we were winning and winning not in our comfort zone, I knew we were going to learn from this and this team could be a state contender,” he said.

Fast forward to the incredible events of June 18.

Notre Dame Prep trailed Forest Hills Northern by a goal when junior Payton Williams, a defender, scored her first goal of the entire season on a sharply-shot free kick with 41 seconds left in regulation – and kept the Fighting Irish’s title chase alive. 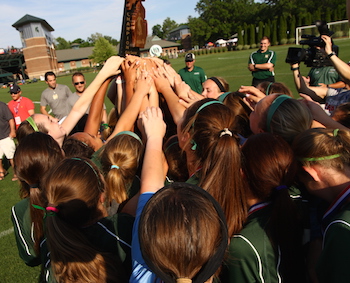 That unexpected score was followed by overtime and then a move by Stachura that surely surprised those unfamiliar with Notre Dame Prep’s run to that point.

With the Fighting Irish facing a shootout, Stachura replaced his keeper in goal with sweeper Eileen Haig, who had a little more experience in similar situations after formerly playing keeper for her club team. Stachura had made a similar switch when Notre Dame Prep faced – and beat – Regina in a shootout in the Catholic League championship game.

The rest – two saves by Haig including on FHN’s first shot, and goals by her teammates including the winner by senior Rosella LoChirco – will go down as the crowning performance of the school’s most successful sports spring ever.

“It was so cool to be involved in,” Stachura said. “A week later, the time it hit me was when I was in San Diego sitting on the beach, talking to a few college coaches, and they had heard about it. (One asked) are you the one who switched your goalie and put a field player in? Yeah, that was me.

“It was just a good thing. Not just for the girls in our program, but for our area in general; it was good for the area.”

The return of past players was doubly meaningful because they'd played a hand in setting up this latest success.

On the field, the Fighting Irish have won six District titles in Stachura's seven seasons with the program. Off the field, they've received academic all-state honors as a team all seven seasons Stachura has been coach, and did so this spring with a grade-point average was 3.71.

The girls soccer team also continued its work this past year with Clarkston SCAMP, with players serving as camp counselors as part of a summer program for children and young adults with special needs. Those memories always become part of the seniors' final good-byes at the team's annual postseason banquet.

“There’s not a girl who doesn’t say it’s the most rewarding thing,” he said. “(They’ve found) it’s really cool to give some of my fun in my life.”

And the Fighting Irish will have more to share after this history-making season.