Divozzo was regarded last spring as a top goalkeeper in the northern Lower Peninsula after helping the Vikings to a Big North Conference title with 10 shutouts while giving up only 0.86 goals per game. But an incredible start this spring should put the entire state on notice. The third-year varsity starter has shutouts in all of her team’s first six games and blanked three opponents to lead Cadillac to the Holland Invitational championship Saturday and earn the Michigan National Guard Performance of the Week.

The Vikings beat Holland Black River 2-0, tied Grand Rapids Northview 0-0 and then defeated Holland 2-0, and have increased their start this season to 4-0-2. Divozzo, who has signed to continue her career at Saginaw Valley State University, wasn’t tested much against Black River, but made a key save diving into the top right corner to stop a shot from the 18-yard line and preserve the tie against Northview.

Cadillac graduated only three seniors from last season’s team that finished 14-6-1, so the start this spring hasn’t come as too much of a surprise to the senior keeper. She also was a key contributor to Cadillac’s girls ski team that placed sixth at the MHSAA Division 2 Final this winter, finishing 20th in both the slalom and giant slalom to earn all-state second-team honors in that sport. She’s a strong student sporting a 3.53 grade-point average but is undecided on what she’ll study at SVSU, although she said she enjoys math and science classes and might consider something in the medical field.

Coach Jen VanNoord said: “I feel so fortunate to have a player like Abby as my goalkeeper. Just knowing she's in net gives me the freedom and the confidence to play a high-pressure formation. She is intense and crazy and calm all at the same time. Abby has the ability to elevate her game when matches are tight … the tougher the match the better she plays. She's also my player that can make a stressed out teammate laugh and relax with her silly sense of humor. Abby is a powerful role model to the young players and a leader in our soccer community. Her confidence and continued growth as a goalkeeper have made an exceptional impact on me over the last three seasons."

Performance Point: “We have a lot of returning players, and we’ve all been playing with each other since we were 8-year-olds. We know how each other plays, know how to work together to keep other teams from scoring.” 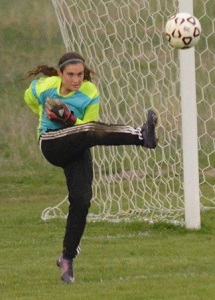 Net minder: (I’m strong at) communication, making sure everyone knows what’s going on. I can see the whole field; they might not be able to see the whole thing. … I like that (keeper) is so different from any other position, and so important also. Most people think you’re the goalie, you just stand there. ... When you make a save, and everyone cheers, that’s pretty cool."

Goalkeeper’s goal: “I want to win a District. Our school hasn’t won a District in girls soccer ever, so obviously that’s the main goal. That would be pretty crazy, just my senior year to finally have that little extra part.”

SVSU, here I come: “The campus is awesome, the staff is awesome. I don’t really know what I want to do, and they’ve got any field of study that I’d want, so it’s a win-win – I get to play soccer and figure out what I want to do at the same place.”