The four-time all-state forward capped her career Friday with the lone goal of a 1-0 Division 4 championship game victory over Kalamazoo Christian, earning the final Michigan Army National Guard “Performance of the Week” for 2017-18. Her final high school goal secured a second straight Division 4 title for the Pilgrims and gave her 197 goals for her career – the second most in MHSAA history.

Jamieson had 54 goals – tied for 10th most for one season – and 71 total points this spring in helping Lansing Christian to a 19-3-2 record. For the second straight year, she was considered the best player in all of Division 4 as the lone selection from that division to the all-state Dream Team. In addition to her 197 career goals, she’ll make the record book career assists list with 72 – and her 268 career points (over 101 games) rank third all-time. Jamieson also returned to her school’s basketball program this past winter, playing that sport for the first time since freshman year and contributing significantly to the Pilgrims’ 15-7 finish.

Her class valedictorian with a 4.0 grade-point average, Jamieson is drawn to biology and similar sciences and aspires to become a physical therapist. She will study kinesiology and continue her soccer career at Division I Liberty University in Virginia this fall after she joins other college players this summer as part of local United Women’s Soccer League team Lansing United.

Coach Joel Vande Kopple said: “The most visible aspect of Kasey’s impact had obviously been her production on the field, where both the number of goals and assists she had are records at LCS since I've been there. Something that often goes overlooked is her availability to play. She didn't miss any games in her four years, and knowing that she was going to be out there every game really boosted our girls. Her personality is what I've appreciated most about her. Despite all her accolades, she always wanted what was best for the team and to see her teammates succeed.”

Performance Point: “What I'm missing most is just the team,” Jamieson said, recalling her final game with the Pilgrims. “I've been with this team the past five months. Basically every day we see each other, so I guess it's just different not having practice to go to, just not talking to them about the games or what's going to happen, or cheering them on or encouraging them. ... I definitely didn't know going into the (championship) game if I'd be the winning goal, or if I would assist it, or if one of my other teammates would have it. But whatever it was, we would've done whatever we could have to have that goal, no matter who put it in or not. It was so awesome to finish my year off like that. Obviously, I couldn't have done it without any of the girls on the team, so all credit to them. It was just a fun year, a fun way to go out. … Obviously, we worked really hard for it, so I'm so proud of the girls.”

Pilgrim pride: (High school soccer) is so much different because it's more of a team mindset, while club becomes a personal mindset because you're trying to get noticed by colleges, by coaches. High school, we're not doing it for coaches. We're not doing it for scouts. We're doing it because we love this sport and we love each other, and we love to push each other and work together. That's what's different about high school – it's not the personal game, it's all team. And that's what I love about it – especially since our school is K-12, all these girls I've been playing with since I was little.”

Showing the way: “Our school, since we're so small, we get to hang out with the elementary students, which is so fun. You get a kindergarten buddy every year, so most of our kindergarten buddies were at the state championship game. It was so cool. And we all have little siblings that are younger students, so all the siblings brought their friends. So it's not just the high school supporting you, but the entire school. It's a cool environment, and it encourages you to do better. (Coach) talks about how there are these little girls that are looking up to you constantly, and how you act, they're going to notice it.” 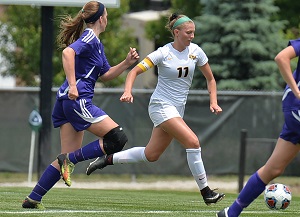 Back on the break: “I played basketball all the way up to freshman year, and then I just stopped and I wanted to focus on soccer. I went into senior year like, I missed the sport and I wanted to try it out. It was fun. It definitely was different. It was cool using different workouts because I wanted to use different muscles and work different areas so I could be an overall (well-rounded) player. I shared the position as a point guard and a shooting guard. I played most of the entire game. We did well. ... The coach (Jason Salsbury) is super supportive, and the cool thing about our basketball coach is he was at all of our soccer games cheering us on. And he has two little girls and a little boy who are looking up to us so much, which is just so fun because some of us get to babysit them. So it's just a cool environment. We're just like a family.”

Faith and family: My faith is the most important thing to me. … A cool thing about Liberty that I like, every time before games they prayed, and they prayed for other people. It was even a bigger family than at Lansing Christian, which I loved and that's what I wanted. I went to one of their games – they were playing somewhere in Tennessee, I believe – and a girl on the other team got injured, we we're sitting there watching and then girls that were on the field and off the field starting praying. That right there, I was like ‘OK, I want to go here.’”