GRAND RAPIDS – Hannah Williams doesn't mind flying under the radar. In fact, the Portage Northern sophomore has thrived in the underdog role.

Williams went from virtually an unknown freshman to shocking nearly everyone including herself with a pair of individual titles at Saturday's Lower Peninsula Division 2 swimming & diving meet at Grand Rapids Northview.

She joined Jordyn Shipps of DeWitt as the only swimmers to capture two events in a meet won by Birmingham Seaholm for the third time in five years.

Williams, who didn't qualify for the Finals a year ago, won the 200-yard freestyle (1:49.42) and the 100 breaststroke (1:03.68), an admitted stunner for nearly everyone. Williams won three state titles in club swimming as an eighth grader, but didn't necessarily move the attention needle as a freshman.

"I'm as surprised as you – I didn't expect it," she said. "I don't know where it came from. I was kind of nervous, but my coach said just bust it, just go for it, just swim as well as I can. Nobody really knew who I was, and that was kind of a perk."

The same can't be said for Shipps, who was making her fourth Finals trip. She captured the 200 individual medley (2:02.50) and 100 free (50.80). Shipps, who is headed to Oakland University next season, credited her experience – combined with a simple swim philosophy – with leaving her in the hunt for a title.

"I don't have a best event, but the (200 IM) is definitely one of my stronger ones," she said. "You need four different strokes to be good, and my approach is just to get out front and stay there. I just wanted the chance to compete, and I did. It was awesome."

While Williams and Shipps stood out as individuals, Seaholm coach Karl Hodgson said his swimmers don't necessarily turn heads individually, but compete as well as any athlete. Seaholm won the 200 free (1:36.15) and 400 free relays (3:31.84), but garnered no individual winners. The same actually happened for last year's Maples championship team. Seaholm finished with 309 points on Saturday to 263 for runner-up Rochester Adams. Grand Rapids Northview was third with 174. 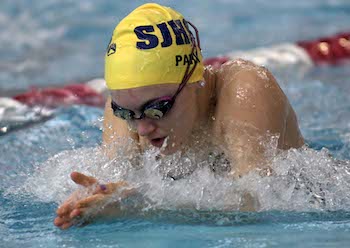 "We have numbers and talent," Hodgson said. "We have been fortunate to have a lot of talented kids. We knew we would be in the hunt. We had a lot of our team back, so we definitely knew we'd be in the hunt. The strength to our team is relay, and depth."

Seaholm's roster Saturday included eight seniors from a team of 56 swimmers. Hodgson said a season which included two stoppages, week-to-week workouts and virtual meetings was difficult, particularly at the end.

"I'll be honest, some girls didn't want to do this," he said. "They had already moved on, so this was tough."

Williams wasn't the only Portage Northern swimmer to win a title as junior Angelina Baker won the 500 free (4:57.15).

Albrecht, just a freshman, went from success in the USA swim program "JAWS" a year ago to her title.

"Obviously it was difficult," she said. "You just try to motivate yourself as much as you can. I just tried to beat my best time and not look at placing."

Unlike Williams and Albrecht, who were making their Finals debuts, Olsen had won three individual events in her first two trips as a freshman and sophomore.

"Each year is as fun as the year before," she said. "Experience helps. You recognize what is around you and what to expect. There is still pressure, but you get used to it."

Forbes, a conference winner in the 100 backstroke and 200 IM, said her personal expectations have grown each season.

"As a freshman you're just swimming to get a personal best. But I have confidence in myself and I wanted to finish first or second," she said. "This was just awesome. I set some goals and I had confidence I could make them."