But there is one stark difference in the Pioneers capturing 23 Finals championships over his 47 years of coaching.

"No, it doesn't get old – I get old," admitted Briggs after EGR added another Lower Peninsula Division 3 championship Saturday at Calvin University. "Every minute goes a little faster, and with the kids there is no difference. They just keep coming in every year. I've always enjoyed the commitment they give.

"With this team there has never been any drama, and some years there has been drama. Talent-wise, we're probably as good as we've been, but the difference is depth. It's probably our deepest team."

That depth was evident in the Pioneers’ third championship win in four years and fifth over the last eight. In all, EGR has now won eight Division 3 Finals crowns to go along with 15 in Class B. The first came in 1978. EGR, which never trailed after the first event Saturday, finished with 444 points followed by Bloomfield Hills Marian with 198. Bloomfield Hills Cranbrook Kingwood was third with 165.5, and Holland Christian fourth with 144. 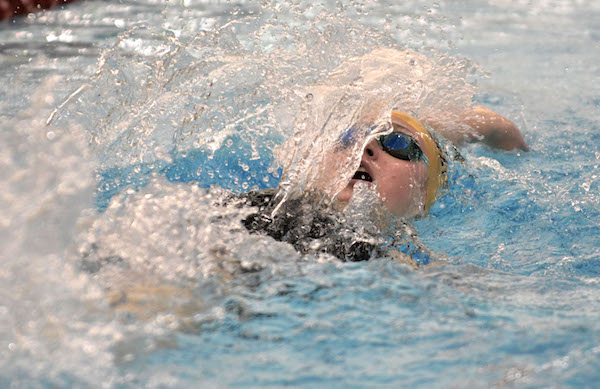 Williams, one of the team's four senior captains, helped two relays to firsts, won the backstroke and was seventh in the 100 freestyle. She agreed with Briggs that depth was the team's strength.

"We're so strong in every class. It's just not one class; we're very well-rounded. We have some girls who only swim one event, but there are others who could do it," she said. "(Being a favorite) is a little scary, but we also say when it comes to the end, we trust each other's work and we look forward to having fun."

"Last year was kind of unusual, but I've been training for this for a long time," Nugent said. "I knew I could finish in the top eight, and I just wanted to swim my best race. I'm super happy that things worked out. This is always a big meet, and I was comfortable coming into it."

While Nugent was a senior in her last meet, Standish-Sterling's Scarlet Maison, a freshman, struck gold in her first championship in winning the 200 individual medley (2:08.360. Maison said her success in the USA Swim program enabled her to win Saturday.

"There was a lot of pressure, but I've been to a lot of USA meets," she said. "I knew I could swim well against good competition; I have confidence. You just have to be true to yourself and have confidence in the work you've done."

The other firsts were gained by Flat Rock's Lauren McNamara in the 100 butterfly (56.23) and Ginger McMahon of Grosse Pointe Woods University Liggett in the 100 breaststroke (1:04.85).

McNamara, whose time was a personal best, said she liked her chances of touching the wall first.

"That's the goal; that's usually the goal," she said. "I've worked toward this all season. I'm real happy."

McMahon also won the breaststroke as both a freshman and junior. She said her goal wasn't necessarily becoming a three-time champ.

"It's more about fun and love of sport," said McMahon, who will swim at Arizona State next season, "I wanted to use this as training for Winter Junior Nationals. But it's nice to see a lot of others I know here. It's a lot of fun."