YPSILANTI – A young team with a promising future became an MHSAA champion Saturday at the Michael H. Jones Natatorium at Eastern Michigan University.

The Bloomfield Hills Cranbrook Kingswood girls swimming & diving team, led by four freshmen, a sophomore and three juniors, stormed to the Lower Peninsula Division 3 championship with 292 points while Bloomfield Hills Marian was second with 207 and Grand Rapids Catholic Central was third with 199.

Although Cranbrook Kingswood was ranked No. 2 coming into the meet, winning the title might have seemed a little out of reach.

“That’s what makes this even more special, because I don’t think they were expecting it,” said Cranes coach Chris Bagley, who was named the Coach of the Year by the state coaches association. “They didn’t know it was possible until we got here.”

Bagley conceded he wasn’t planning on winning the title this year, either.

“I knew these girls were coming, but I didn’t know this was coming,” he said. “We knew we had a fast group, and we knew we were going to be competitive, but to swim the way we did was just a genuine shock.

“We sort of had it played out in our head that we could get close to some team records and maybe win a relay if we were lucky, but to swim the way we did was a blessing.”

A turning point came early. After finishing second in the meet-opening 200-yard medley relay, freshman Gwen Woodbury edged senior Lauren Biglin of Bloomfield Hills Marian in the 200 freestyle in 1 minute, 51.77 seconds. Biglin was the defending champion in the event, and Marian came into the meet ranked No. 1 in Division 3.

“It was a big one and set the tone and said we can swim with anybody,” Bagley said. “It was her best time by over a second, too. We were really excited.”

Woodbury had a hand in all four of the Cranes’ race championships. In addition to two individual events, Woodbury swam the anchor leg on two relays and twice came from behind to win the event.

But it all started in the 200 freestyle.

“I didn’t think I was going to pull it out in the 200 free,” Woodbury said. “I was behind in the first 50, and we were head to head in the second 50. She began to come on in the third 50, and that last turn I had this energy inside of me. It wasn’t even like it was happening, it was like a dream, and I just put my head down and raced and I beat her.

“It boosted my confidence so much, and the team hugged me after, and I just started crying. It made me so happy and so confident.”

Her win gave the Cranes a shot of confidence as well.

“It was the momentum of the meet and the attitude,” said freshman Justine Murdock, who took second in the 200 individual medley and the 100 backstroke and also swam on the 200 medley relay that placed second. “When Jordan (Murrell) won the consolation final in the 200 free, then Gwen out-touched the Marian girl in the final, it gave the vibe for all of us to put in the work and get the outcome that we wanted.”

Woodbury added a first in the 100 freestyle (51.53 seconds). In the 200 freestyle relay, Woodbury was third when she hit the water, and she swam the last 50 in 23.46 seconds – the best leg of any swimmer in that relay and better than the time that won the individual 50 championship.

Woodbury then finished the meet in style. This time, in the 400 freestyle relay, she hit the water in second place, and her time of 51.36 seconds edged her winning time in the 100.

Clearly, she was on a mission in those relays.

“When we talk about swimming for the team, she’s the best at that,” Bagley said. “It is very easy to tell how much she loves this team. When she was on the middle school team, she did great on the end of the relays and she translated it to here and she’s doing great on the relays.

“She just loves swimming for Cranbrook and these girls.”

Although just a freshman, Woodbury has earned the respect of the more experienced swimmers on the team.

“I am amazingly proud of this girl,” said junior Camille Misra, who swam the third leg on the winning 400 freestyle relay team and the first leg on the second-place 200 medley relay, She also was fifth in the 100 backstroke and seventh in the 200 IM.

“I’ve been swimming with her for years and to see the results that she gets is because she is one of the most hard-working people I’ve ever seen,” Misra said. “To see what she accomplished as a freshman is unbelievable. She has the greatest future.” 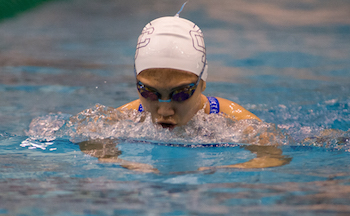 Woodbury’s performance was impressive, but a team can’t win an MHSAA Finals title with just one swimmer. Murrell, a junior, won the consolation races in both the 100 and 200 freestyle to take ninth in each event, and she swam the first leg on both winning relay teams.

“I am very amazed at the outcome of everyone’s hard work and the ability to swim so fast and come together like this,” she said. “I honestly did not think it would happen, and to have it happen like this and be just such a power grab, I love it.”

Another freshman who scored for the Cranes was Hale Oal, who swam the second leg on the second-place 200 medley relay and was sixth in both the 200 IM and the 100 breaststroke. Junior Cate Hofley won a pair of consolation races as she was ninth in the 200 IM and ninth in the 500 freestyle.

While Cranbrook Kingswood dominated, there were other great efforts. Grand Rapids Catholic senior Susan LaGrand was named Swimmer of the Year in the division by the coaches association after she swam the first leg of the winning 200 medley relay and won the 100 backstroke. The victory in the 100 backstroke was her third career individual Finals title over three different events. She also won two years ago in the 200 IM and 100 butterfly.

“I’ve gone through so many events trying to find what’s my thing, so I think it’s just kind of coming around and figuring out what I should have been doing all along,” said LaGrand, who is headed to Oakland University to swim. “Now, my favorite is the backstroke. I used to hate backstroke, but once I learned how to swim it this summer in my club season I came to love it.”

Pontiac Notre Dame Prep sophomore Rhianna Hensler was a two-time champion and defended her title in the 100 butterfly and set a Division 3 meet record in 55.67 seconds, narrowly edging Milan senior Madelyn Cislo, who also broke the existing Division 3 record in 55.90. Hensler also won the 50 freestyle in 23.78.

“It feels so good because of all the training that’s gone into these two races and have it pay off like that,” Hensler said. “In the butterfly, it was pretty close. I just looked at the scoreboard at the end.”

While Cislo did not get the title in the butterfly, she did repeat as champion in the 200 IM as her time of 2:05.01 was more than four seconds faster than that of the runner-up Murdock.

“It is hard not having someone pushing you right next to you, but you just have to dig inside to find that power to keep you going,” said Cislo, who also finished second in the 100 butterfly and will go to Oakland and become teammates with LaGrand.

Biglin, whose bid to repeat in the 200 freestyle was foiled by Woodbury, did repeat as champion in the 500 freestyle as she won in 5:04.69.

“I felt like I let down my team in the 200, so I wanted to come back and show my team that we’re still in this to win,” Biglin said. “It’s great to know that all the hard work has paid off. I was just swimming out there for my team.”

St. Clair senior Molly Likins was the other individual winner in swimming, taking the 100 breaststroke in 1:02.88.

Milan junior Mackenzie Crawford repeated in diving with 463.75 points to outdistance runner-up Allyson Schafer of Wayland (418.79). With the title practically secured going into the final dive, Crawford nailed a forward 2½ somersault that had a 2.6 degree of difficulty. She scored 58.50 on the dive as one judge gave her an 8.0, another a 7.0 and the other five all were at 7.5.

“I always put that dive last because it needs a lot of adrenalin for me to hit, so when it’s last it really pumps me up,” said Crawford, whose coach Chelsea Laginess was named Diving Coach of the Year while Crawford was named Diver of the Year in the division. “I went in the water and had a huge relief. It’s so peaceful and quiet in the water, and it’s so loud in here. It’s stressful until I hit the water, and then it’s all quiet.

“Winning is way better this year. Last year, I was kind of young, but it feels like such a long time ago, and this year I’ve learned a lot of new dives, and I got to show them all off. This year it really felt like it paid off.”

Just like it all paid off for the young Cranbrook Kingswood team – a team that did not want to wait for its future promise to be fulfilled.

“There’s no time like the present,” said Cranes sophomore Murrell.

And no better place than Eastern Michigan University. Five years ago, Cranbrook Kingswood won the MHSAA title at the Michael J. Jones Natatorium, a place where the Cranes are making some fantastic memories.

“I don’t know if I ever thought I’d have a better team than that team, but this one outdid them,” Bagley said. “They broke all the records that were broke at that meet. Now we just have to stay the course.”