HOLLAND – Detroit County Day freshman Elle Hartje could’ve avoided the question; instead, she wanted to know what the situation was when she took the court with her teammate, senior Haley Mullins, in the championship match at No. 1 doubles at the Lower Peninsula Division 3 Girls Tennis Finals in Holland.

“I wasn’t nervous at all,” Hartje said. “I asked Coach if we had a chance to win the title, and she said if we win our match we would win it. It didn’t make me nervous at all.”

Hartje and Mullins may have felt the nerves early when Christian jumped out to a 5-1 lead. Instead, the pair stayed strong and controlled the match the rest of the way. Hartje and Mullins went on to defeat the Eagles’ team 7-5, 6-2 to give the Yellowjackets the final point it needed to secure the championship.

Country Day’s title snapped the five-year winning streak of rival Cranbrook-Kingswood, a team the Yellowjackets defeated the week before at the Regional tournament.

“I can’t remember the last time we won state,” said Country Day coach Jessica Young. “It’s been too long. Cranbrook has won five in a row, and it’s awesome to beat them.”

Country Day is actually the last team to have won the Division 3 title other than Cranbrook-Kingswood, as the Yellowjackets claimed it in 2010.

“We couldn’t have done this without a total team effort,” Young said. “We were upset at a couple of spots, so we needed some big efforts at some of our other flights. Our number two doubles team (Tara Rahmani and Chloe Ward) came up big and reached the quarterfinals. We also got a big lift from Sasha (Hartje) at one singles. It was like a 50/50 match between her and Allison Motea, and Sasha really came up big.” 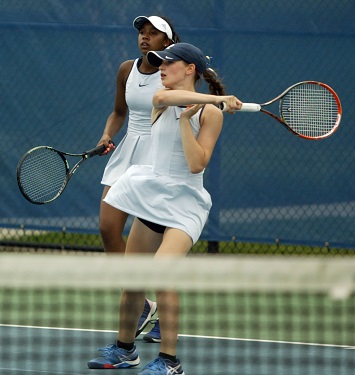 After dropping the first set 5-7, Hartje, the second seed, came back to win the next two sets (6-1, 6-1) to earn her second win of the season against Cranbrook Kingswood’s top player.

“This just feels unbelievable,” Hartje said. “I’ve been trying my whole high school career to win this title. I was runner-up last year and the year before that I made it to the semifinals. To help my team win the state title is the best part.”

Hartje and Motea are no strangers as they have played each other numerous times over the years.

Saturday’s was the deciding match this season as Motea won the first of the year before Hartje won at the Regional meet and then Saturday.

Country Day also claimed individual titles at No. 2 and No. 3 singles.

“It feels really great,” said Karoub, who came in as the number one seed. “I was really nervous, but my teammates really helped me. I have some really great teammates, and they came together for me and helped me out.”

“It was a lot easier this year,” Fadel said. “Last year I would get nervous, but this year I learned how to control my nerves. I just wanted to win this year as a team. It is a lot better when we can win as a team.”

At No. 4 singles, Grand Rapids Christian sophomore Maria Poortenga claimed the MHSAA title. Poortenga, who reached the semifinals last year as a freshman, faced a number of hurdles on her way to winning this season. Earlier, Poortenga broke a finger that resulted in her missing a few weeks, and just before the MHSAA tournament she was battling a foot injury. Poortenga actually wore a boot on her foot the week before the tournament and was unable to practice, although her doctor gave her the green light to compete in the tournament. 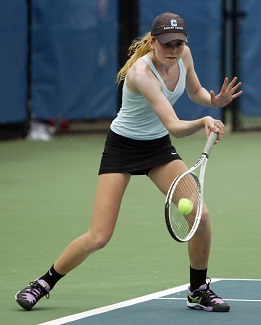 Poortenga made the most of her opportunity as she defeated Allyson Zwiep of Holland Christian 6-0, 6-2.

“This was real, real nice,” Poortenga said. “I was not expected to do this well. My foot was in a boot all week and I was not able to practice. I’ve had a rough season, but we have seven seniors on the team and it’s been real fun.”

Poortenga was seeded third at No. 4 singles but defeated second-seed Jenna Lee of Country Day 6-3, 6-1 in the semifinals before defeating Zwiep, the fourth seed, in the final.

“I just became a lot better player since last year,” Poortenga said. “I had a lot of matches that gave me some good experience, and that really helped.”

A pair of Poortenga’s teammates also claimed a title. At No. 3 doubles, Grand Rapids Christian’s Kate Zwiers and Natalie DeBoer needed three sets to hold off Sauma Du and Alexandra Bowers of Cranbrook-Kingswood, 4-6, 6-4, 7-5.

Cranbrook-Kingswood claimed a pair of doubles titles. In the longest match of the finals, the Cranes’ No. 4 doubles team of Ava Harb and Frances Dube outlasted Detroit Country Day’s Maya Nassif and Sharmila Prabhu 1-6, 7-6 (5), 7-5.

At No. 2 doubles, Amelia Smith and Kate Cao of Cranbrook-Kingswood defeated Caroline Heule and Olivia DeVos of Grand Rapids Christian 6-2, 6-4.

PHOTOS: (Top) Detroit Country Day hoists its championship trophy Saturday at Holland. (Middle) Detroit Country Day’s Elle Hartje returns a shot at No. 1 doubles with teammate Haley Mullins backing her up. (Below) Grand Rapids Christian’s Maria Poortenga won the No. 4 singles title after coming back from a recent foot injury. (Click to see more from HighSchoolSportsScene.com.)