HOLLAND – Last year was a breeze for the Grand Rapids Forest Hills Northern girls tennis team as it won the Lower Peninsula Division 2 championship by 14 points.

This year, with rival Birmingham Seaholm back from playing in Division 1, the Huskies knew they were in for another battle – which is why all of them took out a black Sharpie and wrote one word of motivation on their left forearm.

“We write FIGHT on our arms for a reason, because we never give up,” explained FHN senior Rhea Marwaha, who teamed with fellow senior Sophie Richards to knock off both of the top seeds to win the No. 1 doubles title.

“We knew this was our last hurrah, so we just decided to keep fighting and keep smiling.”

There were certainly plenty of smiling Huskies on Saturday at Hope College, after they outlasted Seaholm for their 11th Finals championship over the past 20 years.

Forest Hills Northern won with 34 points, with Seaholm right behind with 30 points – a full 12 ahead of the rest of the field, giving the end of the two-day tournament the feel of a dual match.

FHN and Seaholm squared off in all four of the doubles finals, with the Huskies winning first and second doubles and the Maples taking third and fourth. Ironically, neither school won a singles flight, but Northern was runner-up in all four, while Seaholm had no singles players reach the finals.

Seaholm, which was tied at the top with FHN after the first day with 24 points, needed to sweep the four doubles finals to have a chance. But Forest Hills Northern had other ideas. 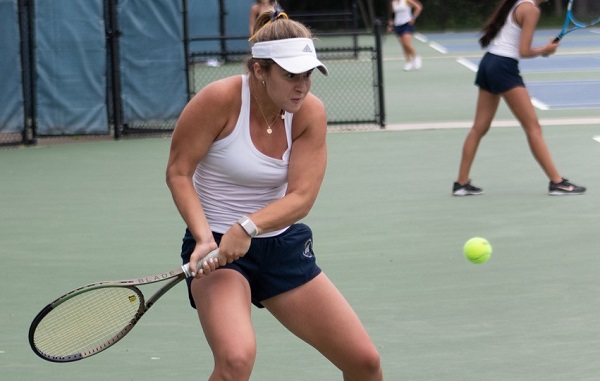 Marwaha and Richards, seeded third at No. 1 doubles but the reigning champions at that flight, rode the momentum after downing second-seeded Portage Central in the semifinals to win an intense three-set match over top-seeded Madeleine Leo and Nina Graham of Seaholm in the final, 6-2, 3-6, 6-4.

“We lost to Seaholm earlier this year, but we knew exactly what we did wrong and we fixed it up,” explained Richards. “We wanted to win today for the team, and we really wanted to beat Seaholm.”

FHN also won No. 2 doubles with the duo of senior Isabella Paul and sophomore Ryan Morey.

While Marwaha and Richards were the “giant killers” for the Huskies in doubles, it was junior Miriam Ogilvie who played that role in singles.

Ogilvie, a junior who was seeded fifth at No. 4, made it all the way to the finals – stunning the top seed in three sets in the semifinals before losing in another three-setter in the final to second-seeded freshman Paula Martinez of Battle Creek Lakeview in the last match of the day.

“I had some really tough battles, and I proved to myself that I could stay intense the whole time,” said Ogilvie. “It feels great to know that I came through for my team.”

Ogilvie was one of four singles runners-up for FHN, and it was those extra points which proved to be the difference against Seaholm. Also placing second for the Huskies were seniors Abby Siminski (No. 1 singles), sophomore Nathalie Lanne (No. 2) and junior Anna Dinsmore (No. 3). 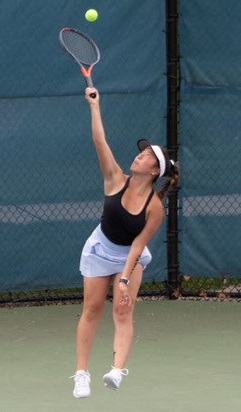 The Huskies reached the finals in all eight of the flights, an incredible showing of depth, which put a smile on the face of veteran coach David Sukup.

“It doesn’t get old, because the kids keep me young,” said Sukup, who has led the Huskies to three second-place Finals finishes over the past 20 years, to go along with the 11 titles. “I don’t know how much longer I’ll be doing this, but at this point, I’m on a one-year contract every year.”

Seaholm, which now has four Finals titles and four second-places over the past 10 years, pulled out a couple of big upsets in doubles over FHN to keep its title hopes alive.

Jane Wineman and Tatum Hirsch upset top-seeded FHN at No. 3 doubles, while the duo of Sydney Fong and Jenna Ting went three sets to do the same at No. 4 doubles – but, ultimately, the lack of presence in the singles finals proved costly for the Maples.

The top two singles flights belonged to the Mattawan, as Novak dispatched Siminski (6-1, 6-3) and Shokohi defeated Lanne (6-1, 6-0). Novak will play college tennis next year at the University of Richmond (Virg.), joining her older sister Kate (Bucknell) in the college ranks.

“Oh, we aren’t competitive at all,” Novak said with a laugh, when asked about playing against her sister. “We have good matches, but I think I can beat her.”

Portage Central junior Anna Dinsmore, the third seed at No. 3 singles, upset second-seeded Courtney Marcum of Seaholm in the semifinals, then knocked off top-seeded Andrea Wang of FHN in the final.