KINGSFORD — They call themselves the road warriors, and for good reason.

The Munising girls don’t play any of their tennis meets at home because they don’t have enough courts in their community. Playing on the road is nothing new to them.

The Mustangs were rewarded for their efforts Wednesday as they squeezed past Iron Mountain 16-15 for their first MHSAA Upper Peninsula Division 2 title. Six-time defending champion Westwood slipped to third this time with 12 points.

“We started our program nine years ago on two courts,” said Munising coach Rod Gendron. “We still have two courts. This is very challenging because there’s definitely a home court advantage for our opponents.

“We’ve had great individual players in the past, but this is the first year we’ve had a very solid team. A lot of these girls play two sports. They’ve given a great effort and have great attitudes.”

Junior Sydney McInnis and senior Morgan Flynn put the finishing touches to Munising’s championship run with a 6-1, 3-6, 7-5 victory over Westwood’s Cayla Ostola and Sierra Laitinen in the No. 4 doubles final on this sunny and seasonably cool day at Kingsford High School.

“This hasn’t been much of a change for us,” McInnis said. “We’re used to playing away from home. We get used to it. It’s just kind of habit for us. We were beating ourselves in the second set, but kind of settled down in the third set. I think our whole team really worked hard for this.”

How does a tennis team practice with just two courts available?

“We practice two hours a day before school starts,” said junior Frankie Mattson. “Once school starts we practice 1½ hours each day. We practice in shifts and do some match play, but we’ve never hosted a meet.” 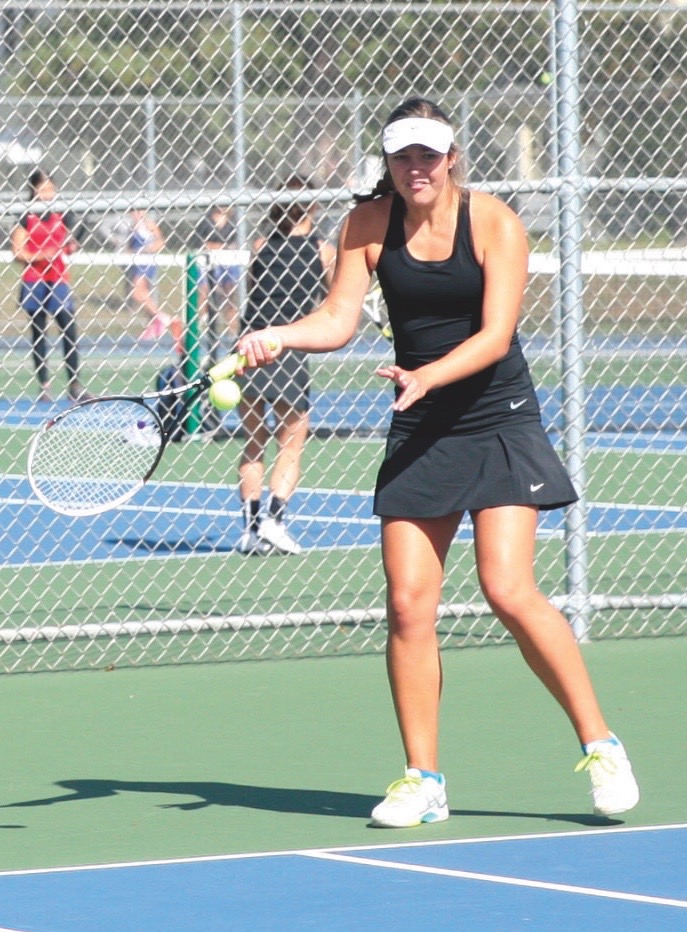 Juniors Bailey Downs and Marissa Immel captured the No. 2 doubles title in a 6-0, 6-3 conquest of West Iron County’s Allie Schive and Sydney Schram.

“We were down 3-0 in the second set,” said Downs. “We told each other, ‘We’re going to get this.’ We got some good shots and that got us excited. We were strong at the net.”

“We stayed positive and fed off each other,” she said. “Our groundstrokes worked pretty well and our volleys went well. We had a lot of momentum carry over from the semifinals (from a 6-0, 6-3 triumph over Iron Mountain’s Grace Hansen and Lindsay Morel). We’ve been best friends since we were little. We know each other pretty well.”

Sophomore Kelsea Ackerman added a fourth title for Munising at No. 4 singles, taking a 6-2, 6-0 decision from Westwood’s Karlie Kargela.

“The first set was kind of slow, but I had a lot of momentum for the second set,” Ackerman said. “I slowed down my racket and got the ball in. I tried to win points rather than counting on my opponents’ mistakes. I just tried to be patient and it worked well. My groundstrokes worked in certain situations, and I went for angle shots when I got closer to the net.

“I think this means a lot to the team. We have a strong junior class and appreciate our seniors stepping up. I thought we did great.”

Iron Mountain captured the most flight championships, four, including the top three singles and No. 1 doubles.

Senior Katie Brule was crowned champion for the fourth straight year, gaining a 6-2, 6-1 victory over Mattson at No. 1 singles.

“That’s the best I’ve been all season,” Brule said. “My coach (Greg Stegall) keeps telling me to relax and play like I do in practice. I knew my serves had to be good and did better with those in the second set. Frankie is a good player. She’s very consistent. I worked on shot placement and kept coming to the net.”

Senior sisters Emily and Katie Bugni also collected their fourth championship with a 6-2, 6-0 triumph over Ishpeming seniors Libbie Doney and Hailly Thompson at No. 1 doubles. 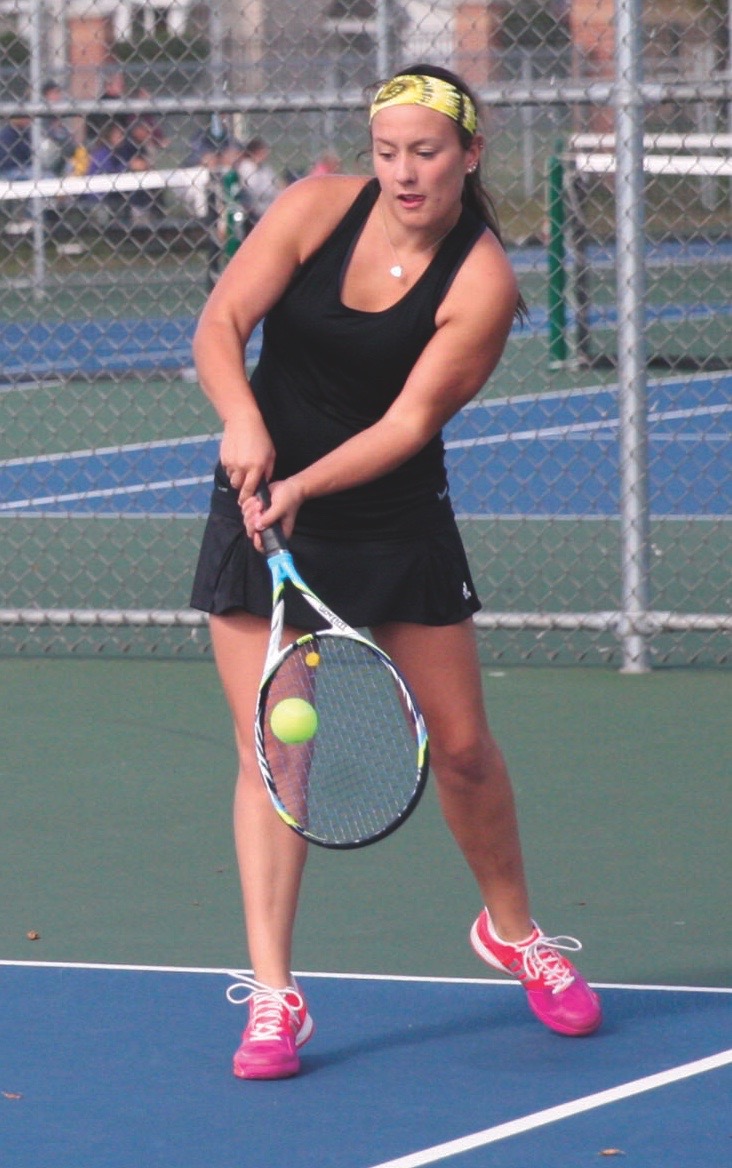 “We were hitting real well and worked together well,” said Emily. “We’ve been playing together for a long time. The Ishpeming girls are good players. It was a little nerve-wracking at first because there were a few teams here we hadn’t played. It was really a nice day for the Finals. It was a perfect day for tennis.”

Katie said the Finals were little emotional for them.

“It’s kind of sad because we’re not going to be playing high school tennis again,” she added. “This is real special to us. We have a lot of nice memories.”

Olivia Truscott provided the Mountaineers with a title at No. 2 singles, which she topped Munising’s Marissa Ackerman 7-6 (7-5). She then won the second set by default.

Westwood won No. 3 doubles, as Averie Kangas and Rachel Hunt beat Munising's Taylor Kahlstorf and Abi Brown for that title.

PHOTOS: (Top) Munising's Frankie Mattson connects on a shot during her No. 1 singles championship match Wednesday. (Middle) Katie Brule of Iron Mountain returns a shot to Mattson during their final; Brule defeated Mattson 6-2, 6-1. (Below) Emily Bugni of Iron Mountain unloads a backhand during the No. 1 doubles final. She and sister Kate Bugni defeated Ishpeming's Libbie Doney and Hailly Thompson 6-2, 6-0. (Photos by Keith Shelton.)