ISHPEMING – The last two seasons, Ishpeming Westwood and Iron River West Iron County have emerged as the top Division 2 girls tennis programs in the Upper Peninsula – and whenever they battle, it’s always a close finish.

It couldn't get much closer Thursday, as the Patriots edged the Wykons 20-19 to win their third straight U.P. Division 2 title and their ninth in the last 10 years. This also was the second year in a row Westwood beat West Iron by one point.

Not only did the two squads have to battle each other in competition, they also had to fight the elements as a cold wind blew across the court for most of the day. Westwood coach Chris Jackson said he wasn’t sure how the day would play out, especially with the weather, but that it ended up going as expected.

“Everything from the weather to the competition with West Iron, we knew that was going to be difficult,” he said. “We weren’t sure how the weather conditions were going to affect things, but everything kind of played out the way that the seeds went. It was almost like the tournament went as scheduled with the exception of maybe one flight.

“Our girls responded and they were just amazing today. We had our ups and downs, and we were down in a couple of matches and in the first sets of some finals. But a couple of the kids responded well and that was the difference today.”

While the Patriots celebrated, it was another excruciating way to end the year for the Wykons. However, West Iron coach Joe Serbentas viewed the result from a positive standpoint and said he was proud of how his team performed.

“It’s always a close one with Westwood,” he said. “They’re a good program, they’re solid, and we knew coming in that it was going to come down to a few flights here and there at the end like it did last year. … They got five championships and we got three, so that was the difference today. But I can’t take anything away from our girls. I thought we fought really hard, and the ones we lost (were) a couple of three-setters. It was a tough way to go out because it’s competitive and I’m sure the girls are disappointed, but it’ll make them hungry, the ones that are coming back next year.

“I thought Katarina (Serbentas) has done great all year, and she was excellent today (she defeated Westwood’s Madi Koski at No. 1 singles). That win puts her record at 20-2, which is a very good year. We did everything we could. Westwood was just a little better today.” 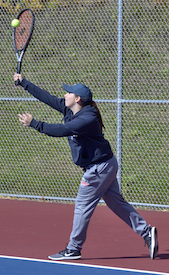 What helped put the Patriots over the top was their singles play, as they took three of the four flight championships. Westwood’s Jillian Koski took the No. 4 match in two sets, while Kaylee Larmour (No. 3) outlasted West Iron’s Livea Mazurek in three frames. The most competitive singles match was at the No. 2 spot, where the Patriots’ Tessa Leece defeated the Wykons’ Izzy Hoogenboom in three sets. After losing the first set, Leece said she was a little concerned, but a chat with Jackson helped calm her nerves.

“I was pretty confident, but after the first set, I was really, really nervous that it was not going to happen,” she said. “But then my coach gave me a really nice pep talk that was very motivational, and it boosted me up. Then I decided that I wanted to win this, so then I was just determined to do it.”

“It’s the same as in any other sport,” he said. “Tessa has come a long way in her game, and the difficult thing for her is in the past she’s relied on her ability to just get a lot of balls back. I think sometimes she fights between ‘do I hit harder?’ or ‘do I try to get balls back?’ I think she was fighting herself a little bit there in the first set and the beginning of the second, but I think she settled on the style she wanted to play and she committed to it and got a good result.”

Over on the doubles side, Iron Mountain, which finished third overall, had its only championship match appearance at the No. 1 spot. However, Saylor Swartout and Claire Montgrain couldn’t top West Iron’s Eden Golliher and Tori Bociek. The other three matches were between the Wykons and the Patriots with West Iron’s Emily Nelson and Anna Malmquist taking the No. 2 match in a three-set thriller. However, Westwood’s Ellie Miller and Meghan Johnson took the No. 3 title and teammates Jenna Wealton and Claire Giles defeated the Wykons’ Aurora Dahl and Madison Berutti at No. 4 to add to the title drive.

Ishpeming took fourth with six points and reached the semifinals in four flights. Munising finished fifth with three points, with Chantelle Harger (No. 3 singles) having the Mustangs’ best individual performance as she made the semifinals. Ironwood followed in sixth place and Gwinn in seventh. The Red Devils had one semifinals appearance with McKensi Koval and Leilah Anderson making it at No. 4 doubles.