Kaila Jackson knew something was wrong.

Less than two months had passed since she competed, as an eighth grader, in the 2018 Michigan High School Indoor State Track Championships in Saginaw, where she set a meet and age group (indoor) record in the 60-yard dash of 7.56 seconds. And her body was sending her confusing signals.

“My times were getting slower,” she said. “I was out of breath.”

Her parents, Anthony and Kimberlee Jackson, weren’t taking any chances with the youngest of their two children. They took Kaila to their family pediatrician and, after receiving the shocking results, she was immediately taken to Beaumont Hospital.

At age 13, Jackson was diagnosed with Type 1 diabetes.

The self-pity, depression or additional physical and/or emotional difficulties Kaila experienced upon receiving the news didn’t last long. That August she won the AAU 100-meter national championship at North Carolina A&T before entering her freshman year at Detroit Renaissance.

“It did take time to get (physically) better,” she said. “After a few days, me and my dad, we said let’s get on the track and see what happens. And I did pretty good. I was surprised.”

The more Jackson runs, the more she wins and the more the records fall. That first season at Renaissance, at the MHSAA Lower Peninsula Division 1 Track & Field Championships, Jackson won the 200-meter dash, placed second in the 100, and her sprint relay teams won both the 400 and 800.

The pandemic cut short the 2020 track season, but it didn’t stop Jackson. She continued to train with her three coaches – her father, Renaissance girls track coach Calvin Johnson, and Olympic gold medalist Darnell Hall, who serves as the Renaissance boys track coach. Unofficially, all three coach both squads. With their help, Jackson continues to improve her standing in the world of track & field. 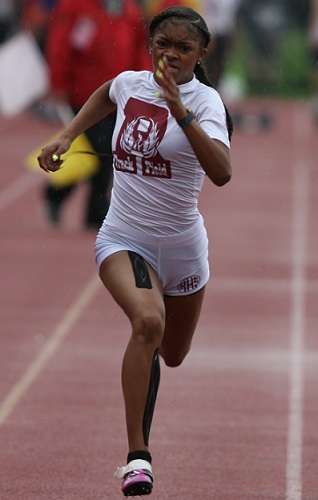 At the Ypsilanti Lincoln Spring Indoor Classic on April 10, Jackson won the 100 and 200-meter dashes with the times of 11.82 and 24.04, respectively. The time in the 100 set a national high school indoor record.

It’s been a quick rise to the top for Jackson, and her ability as a track athlete came out of the blue. Her older sister, Tailar, is an accomplished volleyball player who will graduate from Winston-Salem State (NC) on May 21 after competing in that sport for four years.

Her parents were also fine athletes. Kimberlee played volleyball at Detroit Pershing, and Anthony played basketball and was the starting quarterback on the 1988 Detroit dePoress Class C championship team. Anthony Jackson went to Cincinnati and started as a receiver, but was forced to leave school after his sophomore season due to a family illness.

Kaila Jackson’s entry into track began with a phone call from a gym teacher at her school, Bates Academy in Detroit.

“He calls me up and says, she’s (running faster than) all the boys,” Anthony Jackson said. “So I gave Darnell, who I’ve known for years, a call and he said to bring my daughter to him. After he sees her run he says to me, ‘I think we got something here.’

“My wife and I were surprised. Track is not something we talked about. But one thing I will say: Kaila is a competitor. ”

And that continues, whether it’s competing against the sprinters next to her or battling the diabetes she lives with every day. That passion to compete, to excel, began early on.

In her second season competing on a national level, Jackson placed seventh in the 100-meter at the U-9 championships. As a 10-year-old, she placed second in the 100 and the 200.

Most recently, Renaissance took first place at Friday’s New Balance Invitational that featured 16 teams from Michigan hosted by Farmington High. Jackson was named MVP as she took first in the 100 (12.06) and 200 (24.95), and her sprint relay teams both placed first.

“As a freshman, (Jackson) was immature,” Johnson said. “Her maturation process has improved tenfold. She’s at that point … she’s extremely talented but extremely coachable. She doesn’t carry herself like she knows everything.

“Through the maturation process she’s working toward what I want her to do, and that’s the 400. It will extend her range. She really likes the 200, and (competing in the) 400 will give her more strength.”

Johnson is in his seventh season at Renaissance. His first head coaching stint was at Berkley (1988-98) before he moved on to Southfield High. A hurdles champion in high school in Georgia and at South Carolina State, Johnson said he and Hall are fortunate to be blessed with the top-level athletes under their wings. Johnson’s expertise is working with the hurdlers and the athletes who compete in the high and long jumps, but he’s involved with all facets of the program and team management of the deep and experienced lineup.

Renaissance as a team finished runner-up to Oak Park at the 2019 Division 1 Final, and Jackson surely will make the Phoenix a favorite again next month as it pursues its first championship since 2007.

Like all the athletes whose 2020 seasons were cut short by COVID-19, Jackson was disappointed she was unable to compete in school-sponsored meets. That said, Johnson said that left a bitter taste – with the result being Jackson is even more determined to excel.

Finishing first is but one goal. Others include being a leader and a role model. In the end it’s about being the best person she can be, as an athlete, a student (Jackson has a 3.8 GPA) and teammate. She achieves while also giving herself three insulin shots daily.

“We don’t want her to get too big-headed,” Anthony Jackson said. “She’s a humble kid who has an extreme love for the sport. She’s has great leadership skills and is a student (of the sport). She’s just 16. She’s special.”

It would be easy for Jackson to get ahead of herself, to look beyond this time of her life and imagine competing in college or internationally. As important as it is to have goals, it’s just as important to remain in the moment and work to improve on a day-to-day basis. Jackson knows she’s in a spotlight, and there’s a responsibility that goes along with being at the top.

“It’s about staying humble,” she said. “I don’t get a big head when I talk about (my accomplishments). I stay humble.

“My coaches tell me to run with a purpose. I realize people with diabetes will look up to me as a role model. When I could see I could get over it, maybe they can look and say, ‘I can get over it, too.'”

PHOTOS: (Top) Detroit Renaissance's Kaila Jackson, middle, paces the field on the way to winning the 200 meters at the 2019 MHSAA Lower Peninsula Division 1 Finals. (Middle) Jackson races through the final few steps of the 100 that day in finishing runner-up in that event. (Click for more from RunMichigan.com.)