KINGSFORD — It was bit of a challenge at times, but the Ishpeming girls captured their first MHSAA Upper Peninsula Division 2 track and field title in eight years Saturday by scoring 151 points.

Iron River West Iron County was runner-up for the second straight second with 126, followed by Manistique at 59.

“We worked on handoffs a lot in practice and those were a key for us,” said Spencer, who will attend Northern Michigan University this fall. “We just focused on doing the best we could, and our team showed its true potential. I’ve been to the Finals all four years, and this was the best. The energy was contagious.

“Everybody just supported each other. This is a great way to end my senior year.” 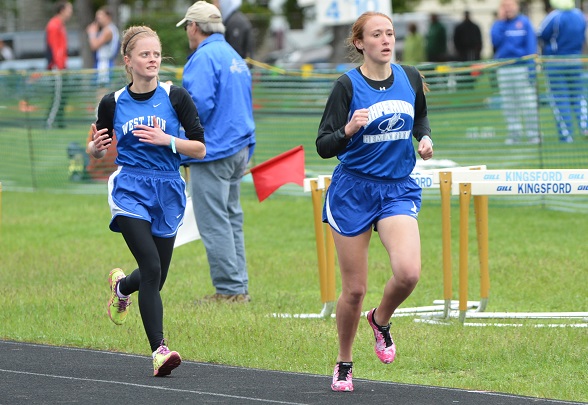 “I was not happy with the 1,600, but felt better during the 800,” Harris said. “The 800 is my favorite race, and I’m very pleased to get the school record. I started weight training, and I think it helps a lot.”

“I’m not quite where I want to be,” Etelamaki said. “I just tried to find someone to draft off of and had enough left to kick it in at the end. We haven’t had many windy meets this year, but the temperature is pretty good (mid 50s). I really can’t complain about the weather.”

Manistique made its strongest showing in pole vault, which was won my Katie Davis at eight feet. Josie Price was runner-up (7-6) and Brittney Zellar took fourth (7-0).

PHOTOS: (Top) Ishpeming's Jessica Spencer crosses the finish line during one of her four events Saturday at the U.P. Division 2 Final. (Middle) The Hematites' Khora Swanson, right, works to stay ahead of West Iron County's Tori Harris; the two raced each other in the 800 and 1,600. (Photos courtesy of Cara Kamps.)