Negaunee, which held a three-point lead going into the day's final race, took sixth in the 1,600.

"What a day," said Marquette coach Natalie Messano. "It was a battle all day. Negaunee has a great team. It's real stressful as a coach, although I had faith in our girls. We had our eye on the trophy. But they made us work for it, that's for sure."

Negaunee gained the upper hand in the previous race with juniors Emily Paupore and Talon Prusi going 1-2 in the 3,200 run on this sunny and warm day at Flivver Field.

"It was close all the way," said Negaunee coach Vickie Paupore. "To say I'm proud of our team is an understatement. Talon really stepped up in the 3,200, and our throwers had big performances. Emily and Chloe Norman are hard workers. Both gave it their all and did what they needed to do." 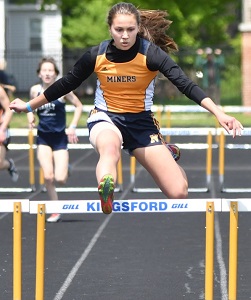 "I didn't have my best 3,200 run, but I'll take it," said Emily Paupore, who took a week off after the Regional (May 16 at Negaunee) due to shin issues. "I'm learning to deal with adversity. Not everything goes the way you want. You just have to push through it. Having to deal with it makes you stronger. I have so much support from my family, coaches and friends. I love this kind of pressure. It makes you work so much harder and want it more."

"My coach (Brad Boven) is really helpful," said McLean, who was runner-up in discus (108-3). "He gives me a lot of pointers. Today, he just told me to worry about myself and stay positive. My throw in the Regional was a little bit of a motivator, but I always try to get better. I had a real good throw in disc, but it was a scratch. That's just the way it goes. The girl from Negaunee (junior Abbie Tollefson) is really good."