KINGSFORD — A season of steady improvement paid off for the Ontonagon girls track & field team Saturday as the Gladiators earned their first Upper Peninsula Division 3 Finals title in five years with 73 points.

They were followed by Rudyard with 64 and Stephenson with 54½.

“It was great,” said coach Brian Amos. “It was one of those seasons which was full of surprises. The girls just kept getting better. Surprisingly, in our first meet on a cold and rainy day in Ironwood (Kraemer Invitational), they started looking smooth. Their performance speaks for itself.”

Sophomore Lilly McIntyre won the 100-meter dash in a personal-best 13.7 seconds and classmate Makennah Uotila took long jump with a personal-best leap of 16 feet on a hot and humid day. 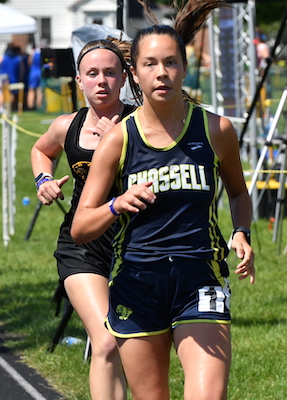 “I had a pretty good start in the 100,” said McIntyre. “The warm weather helped. I didn’t have to spend so much time getting warmed up.

“This is a big confidence builder. We had the best handoffs we had all year (in the 800 relay).

“Those are tough races, especially with short recovery times in between,” she said. “I just try to pace myself for all events. Sixteen feet in long jump was my goal all season. I’m very excited.”

“I try to start fast and stride it out,” said Smith. “It’s really good to have this competition, and it feels great to work hard all year and take a first up here. I had the second-fastest qualifying time. I knew I had a chance.”

Emma Bogacki added a first for the Bulldogs in discus (100-5).

“It’s such a hot day, and we never had competition like this,” said Englund, who will run at Ferris State next season. “I didn’t want to get boxed in. With 200 meters to go, I knew I had to kick it in. It was a relief to win the 800.” 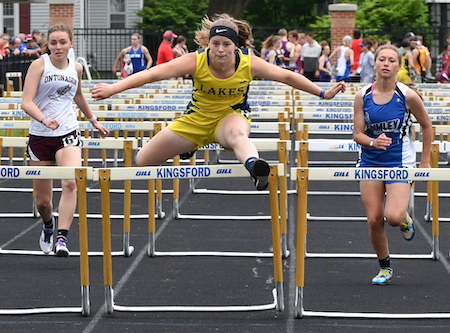 “This is my favorite race,” she said. “I knew I had to beat two girls to place. I knew about Gwen Kangas (of Chassell), but I didn’t know about the girl from Bessemer. When I saw they were in the 5:40s, I knew I had to pick it up. After the first 800 I felt I had a chance, and with the Rudyard girl right next to me (during the final lap), I knew I had to kick it in.”

“I just stayed positive,” she said. “Doing cross country helps quite a bit with all that running and conditioning. It’s just a matter of making sure you’re hydrated. We knew it was coming. You just have to prepare for this.”

Lake Linden-Hubbell took the 400 relay (54.7), edging Brimley by three tenths of a second, and freshman Abi Codere won the 100 hurdles in a personal-best 17.16.

“I think I had a good start,” said Codere. “It felt like my form was good. This is a big confidence builder and a good learning experience. I never expected this, but after one of our home meets, our coach told me I may have a chance.”

“I had a pretty good start in the 200 and really kicked it in at the end,” said Bennin. “I poured a glass of water on myself before the start, and it felt real good. That gave me a little bit of a cool down before the race. After looking at the forecast, we knew it’d be hot and it helped me prepare mentally.”