Jefferson this weekend will finish one of the finest careers in recent Michigan high school track & field history. She’s won two individual MHSAA Finals championships and run on four title-winning relays over the last three seasons and holds the Lower Peninsula Division 1 and all-Finals record in the 400 meters of 53.50 seconds, which she set as a sophomore. She shined again in her final local meet Friday, winning both the 400 (54.93) and 100 hurdles (14.10) at the Oakland County Championships to earn the Michigan National Guard Performance of the Week.

Jefferson’s times Friday either set or tied her lowest in those events this season, and she’ll enter Saturday’s Finals having run the second-fastest LP Division 1 Regional times in both races. After winning the 400 as both a freshman and sophomore, Jefferson finished second in both that race and the 200 at the 2015 Finals. She decided to take up hurdles again this spring to help her improve her 400 time, and her fastest 200 (24.27) and 300 hurdles times this season (43.89) according to Athletic.net also would have placed her among the fastest Regional finishers in those races across the division this spring.

She also ran on winning 400 (47.78) and 800 (1:38.74) relays at the Oakland County meet as Oak Park won the team title. Her 400 relay enters this weekend with the top Regional time in the division, and her 800 relay posted the second-fastest. Jefferson has signed to continue her track career this fall at University of Virginia; she is undecided on a major but carries a 3.6 grade-point average. She also has run cross country at Oak Park throughout her varsity career.

Coach Brandon Jiles said: “Anna has so many great qualities that make her a special athlete. A few of the things that stand out are her commitment, reliability, leadership and how quickly she adapts and learns. Throughout her high school career, Anna has been a major team player, not only in just track but also cross country, going above and beyond to help the team score points. In this day and age it’s rare for an athlete to sacrifice individual glory for team success; Anna has done that. She also has handled business academically, being an honor roll student every semester of high school. She has been a major part of the success and growth of Oak Park High School track and field. We are going to miss her.”

Performance Point: “(Oakland County) was one of the toughest meets I’ve had this season, with the exception of Regionals. It really gave me insight into how I need to perform at states, what I need to work on, and my strong points and weak points. I learned I have to have a better recovery, take one race at a time, (learned) small things I need to critique in hurdles. I need to keep working harder in the 400, and (improve) some small things in my relays.”

Jumping hurdles (again): “I did hurdles in middle school. I really wanted to get my 400 time down, or just in general get my times down, and in middle school I noticed running hurdles made me faster. I’d see other people (who added hurdles) run open events a lot quicker than they used to be, and my mom wanted me to go back to running hurdles – I was like, why not? It wasn’t too hard, but it was a little tough. I had to learn to adjust to hurdle workouts; they do longer workouts than sprinters and quarter-milers. The one thing I learned that comes with hurdles is your muscles need to adjust to hurdles. My body got used to it, and it got easier to adjust now.”

Lasting legacy: “I just want to be remembered as a person that worked hard, was team-oriented, and whenever it came down to crunch time and I had to perform, that I tried my best and was a dependable teammate. I’d love to win the 400, but my dream scenario for this weekend is to come home knowing I ran my races the best I could, like I was supposed to, and that my coaches are proud of me and I’m proud of myself for running the type of races I have.” 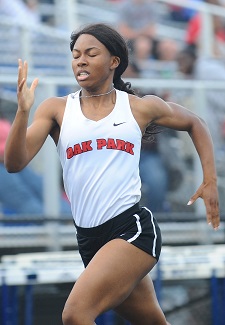 Home at Virginia: “I really felt comfortable there. Comfort is a really big thing to me. … It has an old feel but a modern feel to it also. The whole track team is like one family; there aren’t cliques like distance runners with distance runners, sprinters with sprinters. Everyone mingles together, everyone from different sports, and the coaches were really welcoming and everything was just beautiful. It was kinda like falling in love with a school at first sight.”

Questions & Answers: “I know I really like science class, and I also like math too. With science, you get to explore a lot of different things, and a lot of things about the human body interest me – I have a lot of questions about it, like what makes this work like that, how it reacts to something else. Math, it’s numbers, and numbers don’t lie. With math there are a bunch of equations and calculations to go through, but (there’s nothing) more accurate than numbers, and you can’t get better than that.”

PHOTOS: (Top) Oak Park's Anna Jefferson clears a hurdle during Friday's Oakland County Championships at Waterford Mott. (Middle) Jefferson leads the competition during one of her four individual or relay wins at the meet. (Photos by Dave McCauley/RunMichigan.com.)