“It’s a great feeling, said 11-year Fowler coach Jill Feldpausch, a former standout for the Eagles during the 1980s. “We had 30 points coming out of the morning (session) with a first place in high jump, a first place in pole vault and the 3,200-meter relay. That was pretty awesome.”

The 3,200 relay team of Josie Koenigsknecht, Taryn Schafer, Grace Boak and Morgan Goerge turned in a time of 9:51.85 to get things rolling in the right direction for the Eagles. Combined with Ciera Weber’s height of 10 feet, 3 inches in the pole vault, and Alyssa Vandegriff’s top effort and school record of 5-5 in the high jump, Fowler had a good cushion with some of its best events remaining.

“Our goal was to win all four relays, and I don’t think that’s been done at Fowler before,” Feldpausch said. “In the 100 hurdles, for three of them to make the finals? They are constantly being challenged, and it’s something to be proud of.” 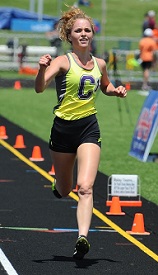 “Everyone on the team has worked so hard to win a state championship,” Vandegriff added. “We all pushed each other at practices and worked our tails off.”

A couple of future University of Michigan runners capped their prep careers in style Saturday as Concord distance dynamo Samantha Saenz pulled off a hat trick and sprinting star Chika Amene nearly did the same, settling for two victories and a runner-up effort by the closest of margins.

Closing out a phenomenal four years, Saenz, who boasts three all-state performances in cross country, including a Division 4 title this past fall, entered Saturday’s meet as the two-time reigning champion in the 1,600 and a 2017 all-state performer in the 800 and the 3,200. She swept all three events this time around.

The first Saturday in June continues to be bittersweet for Saenz. It was just two years ago that her older sister, Saren, passed away due to complications from a combination of physical and mental disabilities the evening of Samantha’s first 1,600 title.

“I just wanted to go out there and do it one last time for my family, for my friends and for my sister,” Saenz said. “I just run for her. It’s a great feeling.”

“It never loses its excitement,” she said. “Every time I cross the finish line, it’s so meaningful to me because my sister couldn’t walk or talk. Just the fact that I get to have that gift, it’s just a good feeling.”

For Amene, winning championships has become standard operating procedure, but she certainly hasn’t taken them for granted. She captured victories in all three sprints and was part of Southfield Christian’s winning 1,600-meter relay last June and followed that up with wins in the 100 (12.44) and the 200 (25.33) in her final prep appearance Saturday.

As proud of those wins as she is, the second-place effort to Beal City freshman Angela Kotecki (57.53) in a photo finish at the line in the 400 stung.

So were the performances of several others who came away from Hudsonville with championships. Reading’s Baleigh Irelan was the top performer of the day in the 300 hurdles (45.85), Litchfield’s Allie Vanous notched victories in both the discus (132-10) and shot put (40-4) and Hillsdale Academy’s Katie Vanhavel claimed a title in the long jump (17-3¾).

PHOTOS: (Top) Fowler’s Alyssa Vandegriff clears a hurdle during her team’s championship run Saturday. (Middle) Concord’s Samantha Saenz sprints the straightaway during one of her three victories. (Click for more from RunMichigan.com.)