The Grand Ledge senior had one more shot at achieving her goal at Saturday’s MHSAA Individual Finals at Rockford High School – and she made the most of it.

Maurer claimed the Division 1 individual all-around championship with a total score of 37.450 across her four events.

She clipped Rockford sophomore Lacey Sheid, who finished with a 37.400.

Farmington United senior Sydney Schultz won the all-around in Division 2 with a score of 37.000, while Rockford’s Anna Tracey (35.775) placed runner-up. 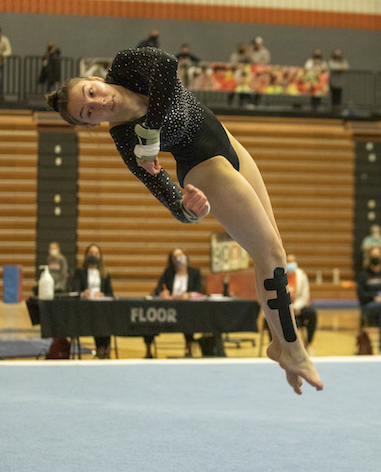 Maurer placed fourth in the Division 1 all-around two years ago and was looking forward to her final chance.

“Ever since my freshman year, my coach and I kind of knew that I had the potential to win,” Mauer said. “And after having that taken away from me last year with COVID and everything, I really wanted to come in this year and try my hardest to fight for that top spot.”

Maurer won three of the four events. She took top honors in the floor exercise by producing a career-best score (9.8) and also won vault (9.525) while tying Livonia Stevenson’s Autumn Wronikowski on the balance beam as both scored a 9.575.

The beam gave Maurer troubles in the team competition Friday night, as she fell, but she redeemed herself in victorious fashion.

She also overcame a minor injury on her first rotation of the day.

“I had a pretty bad bar rotation and I injured my elbow, so we weren’t sure how I was going to do,” Maurer said. “It was a rough way to start the meet, but I’m really proud of how I did on everything.

“I stayed on the beam and won, and on floor I had my highest score in my gymnastics career. I hit my first 9.8 so that really got me motivated to do vault.”

Maurer knew she needed a high score in that final event.

“We were looking at other people’s scores and saw I needed that 9.5 to win,” she said. “I just really ran into that vault, and sticking it I think was the highlight because it was the end of my career and it’s what won the meet for me.”

Scheid topped the field in the beam with a score of 9.650 and was runner-up to Maurer in the floor exercise.

“I was so happy with my bars,” Scheid said. “I have not hit a good bar routine in a while. I didn’t hit my feet on my bail and I almost stuck my double, so I was super proud of it.” 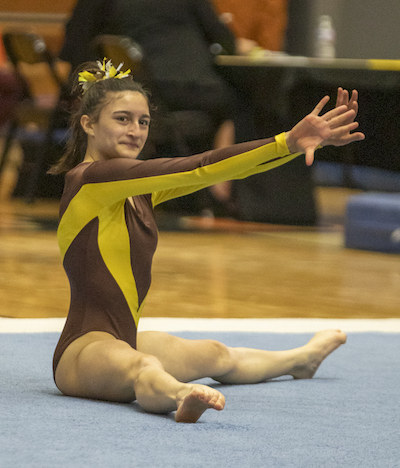 “I’m a little disappointed because of my beam performance,” she said. “If I would’ve stayed on the beam I could’ve won, but that’s OK. I’m super proud of how I did and super proud of who won because she did an amazing job.”

Scheid was making her debut appearance at the Finals.

“This was my first state meet because I had never done high school gymnastics, so my expectations were very low,” Scheid said. “I just wanted to get a feel of the environment and what to expect. My goal was to not win, it was to have fun and stay calm. I hope I can carry that throughout to senior year.”

“I just tried to take one event at a time,” Schultz said. “I was just trying to keep my cool, I guess.”

Schultz finished sixth in the all-around at the 2019 Finals.

“I was just happy that I kept a positive attitude through all of it,” Schultz said. “I have a hard time with that sometimes.”

Tracey, a junior, snagged the beam title with a score of 9.375. Jackson’s Addi Richmond won the Division 2 floor exercise with a 9.325.