ESCANABA — Gymnastics is showing signs of growth on the club level in the Upper Peninsula.

Will some of that eventually lead to a larger number of high school programs north of the Mackinac Bridge?

That number is now down to three with Escanaba, Marquette and Negaunee as the remaining programs.

“I’m excited that club gymnastics is growing up here and serving as a feeder to the high school programs,” Negaunee coach Eyre Becker said. “I’m hoping the three programs will keep going strong and serve as motivation for other schools to bring back their programs. I would like to see Gladstone and Menominee bring back their programs and schools like Houghton start a high school program. I would hate to think of all that equipment rotting in a warehouse somewhere.”

Theresa Pascoe, who coaches a self-funded program at Escanaba, has similar thoughts.

“I would like to see some of the old schools pick it up again,” she said. “If we continue to operate gymnastics clubs, the high school programs are only going to get stronger. We need the feeder programs to keep them heading in the right direction.

“I don’t know if the number of programs we have up here will change, but I do know we have some parents from Gladstone and Rapid River who would like to see their children compete at the high school level. This biggest thing is finding a qualified coach.”

This could be a time of opportunity for Upper Peninsula high school gymnastics, with clubs in Marquette and Escanaba but also Houghton and Baraga, where schools don’t have programs.

“It would be nice to see high school teams in those areas. I just don’t know what their thoughts are,” Marquette coach Kris Lakenen said. “Hopefully with this being an Olympic year, we’ll see even more interest.”

And the benefits of competing at the high school level are easy to list for current Upper Peninsula athletes.

“We try to be like a family up here and cheer each other on,” Marquette sophomore Kiah Staley said. “Getting to hang out with your teammates and going to all the meets is also a lot of fun because we get a chance to bond.”

“Coming from Father Marquette to a public school was a big change,” she said. “The size of our entire grade was about the same as one class at Marquette High. We still have each other from Father Marquette, only there weren’t as many sports at the Catholic school. Now we have a lot more options and there are more people to push you to work harder. … Everyone is real nice, and it’s very energizing.”

Escanaba sophomore Karlie Ohman switched from competitive cheer to gymnastics a year ago. “I’ve always helped out at gymnastics camps,” she said. “I love it. It’s really fun.

“My favorite events are the balance beam and floor exercise. It was very scary to go up on the beam and perform at first, but you just have to get over your fears. I really enjoy tumbling and putting together floor routines. I also enjoy going on the (uneven) bars, but I need to get better strength and work on getting higher points.” 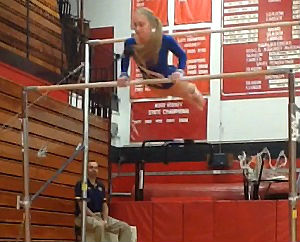 “I was in gymnastics with (former Marquette standout) Rylee Doucette two years ago and she did very well," Taylor said. "I always watched her and she would help me and tell me how to get better."

“Gymnastics is unique that way,” said the Miners’ team captain. “I would definitely like to see more teams up here. I think that would help the teams in the U.P. … I like the competitiveness and feeling of a team. Our teammates are real supportive.”

“I think we’re well rounded as a team,” she said. “We just have a lot of fun. It’s nice having all the support from your teammates and having the other teams support you.”