Over 30 years of riding shotgun with Jack Roberts, I quickly learned to respond whenever I was asked about the lifetime values of high school sports, with a laundry list with these two items at the top: 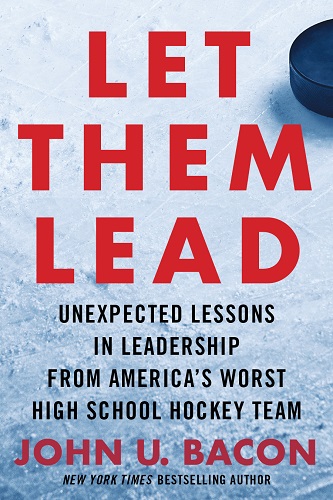 In reviewing the newly-released book by Ann Arbor’s own John U. Bacon – “Let Them Lead, Unexpected Lessons in Leadership From America’s Worst High School Hockey Team” – everything flows from those two values all of us in prep sports hold near and dear.

I met John in 1997 when he was a sportswriter at The Detroit News, where he was covering his high school alma mater – Ann Arbor Huron – in the Class AA Football Final at the Pontiac Silverdome. Just a few years later, the story that holds the detailed leadership lessons together in this book would begin when he was named the head hockey coach at Huron, inheriting a team that finished the previous season 0-22-3.

Building everything he put into that team with the premises that no one would outwork the River Rats, and as a team they supported each other, Bacon’s charges rose from not even being listed in the national team winning percentage listings - about 1,000 schools - prior to his arrival, to a top-five spot in the state’s rankings in his fourth year.

Along the way, the buy-in to the leadership themes made Huron Hockey cool again at the school and earned the River Rats the respect of their opponents. The values being taught gave value to the program. In making it hard to be a part of the team, more kids wanted to join it. They valued the experience. They led and supported themselves on and off the ice.

With the book being written nearly 20 years after the events it is based on, Bacon solicited input from a variety of players to verify the accuracy of events, and they flooded him with additional stories of their own from their playing days and adult lives which illustrated the leadership skills they learned in the locker room, training sessions, practices and games. 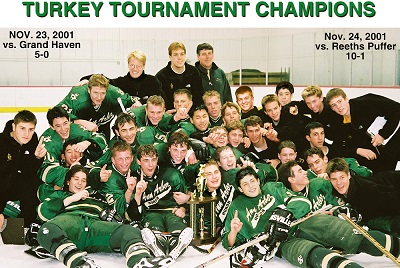 Like any book on leadership, you forge through those details about applying certain things in the workplace, but what keeps you engaged is the team. You’ve gotten hooked by the River Rats, and you just have to see how this thing turns out.

This feel-good tome resonates whether you’re a coach or a corporate type. It’s an easy read, and you'll take a lot from it.

John U. Bacon did play ice hockey for the River Rats, owning the distinction for playing the most games at the time he graduated – but also never scoring a goal. His writing, teaching and speaking career have produced seven books which have been national best sellers; he’s an established historian on a variety of topics – including the football program at University of Michigan, where he currently teaches; and he’s in demand as a public speaker.

Let Them Lead is published by Houghton Mifflin Harcourt, and available through a variety of bookstores.

PHOTOS (Top) Huron's hockey team runs the Michigan Stadium stairs in 2002. (Middle) "Let Them Lead" tells the story of the program's transformation. (Below) The River Rats celebrate their Turkey Tournament championship in 2001. (Photos courtesy of John U Bacon.)