But even though we’re just past the halfway point of this season, the Blue Devils have shown they have what it takes to make a trip back to Plymouth for another title shot.

South is 13-2 and ranked No. 2 in Division 3 in the latest state coaches association poll. To say things have been clicking would be an understatement. Not only have the Blue Devils surprised most in the Metro Detroit area, they’re the surprise team, statewide, in their division.

Take one game recently as a prime example. Detroit Catholic Central is the reigning Division 1 champion and currently ranked No. 1. On Jan. 8, South traveled to Catholic Central’s home arena (USA Hockey Arena, also the home of the MHSAA Finals) and defeated the Shamrocks 4-3.

The result stunned many. Catholic Central entered the game having won its last six by shutout. Less than four minutes into the game South’s David Rivard scored off a pass from Keegan Spitz to end that scoreless streak.

In addition to this incredible win, the Blue Devils received an immeasurable amount of self-confidence.

One contributor who’s playing with supreme confidence is senior goaltender Will Strickler. A two-year starter, he also played as a sophomore – and in fact his first game was against Catholic Central.

“We got shelled, 9-0,” Strickler said. “In the last three years only two teams from Michigan have beaten CC – (Bloomfield Hills) Brother Rice and us. That (victory) made a statement. We’re for real. We also stopped their shutout streak, which was nice.”

Even though the Blue Devils returned most of their starters this winter, there were concerns. The most obvious question was how this experienced team would play with a new coach.

Paul Moretz took over the program after last season, and this is his 22nd coaching hockey. A graduate of Port Huron High, Moretz started coaching when he was 21, almost immediately after graduating from Western Michigan University. He began with youth hockey in Port Huron before moving on to the Honey Baked Hockey Club and Littles Caesars Amateur Hockey League. He spent the last 10 seasons with Little Caesars, and though this is his first stint coaching high school hockey, he said the timing was right.

“The AAA team I coached was with me all the way up,” Moretz said. “We knew last year would be our last together, so that was going to be it.

“I applied for the South job and, to be honest, I had no clue (how good this team would be). I knew there was potential. I knew it was a good group of young men. I knew there was a group who wanted to work. I didn’t know if that would transform into wins.” 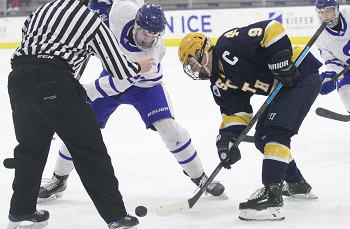 Of the 23 players Moretz has on varsity, 10 are seniors, most playing important roles. It’s common for a team with such success to be senior-dominated – although Moretz added that 13 potential returnees bode well for the team's future.

Spitz, a forward, leads the team in scoring with 18 goals and 16 assists. Adam Strehlke, who centers the top line, is next with 12 goals and 12 assists. Both are seniors. Next are two juniors, Aaron Vyletel (14 goals, seven assists) and Dean Therriault (eight goals, 13 assists).

South sports four captains, with Strehlke and Therriault joined by Xander Mills and Tommy Daudlin. All are seniors. “Our leaders are our captains,” Moretz said. “Quite frankly, we have a lot of leaders.”

Lacking in size, South plays fast. The Blue Devils chase the puck and attempt to create scoring chances with their forechecking.

South’s lack of physical play may have hurt in its two losses, both to state powerhouse Trenton. Trenton won the first game 3-2 in overtime and the second 2-0, with the second goal coming after South pulled its goalie. But South did send 35 shots on goal the first time, and 34 the next.

“We’re a puck-first team,” Strickler said. “Coach told us that against Trenton to let them make their runs. Just go for the puck. Playing physical hasn’t been a key for us.”

That doesn’t mean there hasn’t been a concerted effort to play more consistently on the defensive end. Last season Bloomfield Hills Cranbrook Kingswood downed South 10-2. This season, in the game immediately following the victory over DCC, South defeated Cranbrook Kingswood, 6-2.

Strehlke points to four reasons for his team’s turnaround. One is Moretz – and, partly because of the new coach, there’s a new attitude.

Strehlke also said players are more committed. And you can’t overlook the experience.

“(Moretz) is part of it,” he said. “But everyone has bought in. We’re playing better defensively. We’re allowing fewer shots. And Will has played well all year.

To Moretz, coaching at this level is no different than it was for him coaching for Little Caesars or elsewhere. For one, he has his longtime assistant Nathan Reilly with him. Moretz allows Reilly the freedom to coach without micromanaging. Another key element, according to Moretz, is having his players pay attention to detail.

“They’re willing to do the little things,” he said. “They trust the game plan, and they execute it very well.”