The Millington junior pitched her way out of three tight spots, including a tense bottom of the seventh inning, to lead the Cardinals to a 5-3 win against Sanford Meridian in an MHSAA Division 3 Softball Semifinal at Michigan State University’s Secchia Stadium.

“Everyone has enough confidence in each other,” said Sherman, who struck out 11 while walking one and allowing seven hits and one earned run over seven innings. “If I make a bad pitch, I have enough confidence that one of my teammates is going to be there to pick me up. So, in a jam, that’s kind of nice. In a jam, I know that I have to buckle down and I can’t miss a pitch.”

The Cardinals (39-2) advanced to the Division 3 title game against Coloma at 3 p.m. Saturday, which will be their first trip to an MHSAA Final in this sport.

“It is such a great feeling to know that we are the first team in school history to ever get this far,” Sherman said. “That is huge, and I wouldn’t want to do it with any other girls.”

Sanford Meridian (27-15) had a chance to prevent that first title game trip, however, scoring a pair of runs on an error and bringing the winning run to the plate twice in the bottom of the seventh inning. A strikeout and a pop out ended the game, however.

“We didn’t give up,” Sanford Meridian coach Jamie Smith said. “Unfortunately we had a few innings where we had some poor at-bats, but they didn’t give up at all. They battled, and I think we even had a little fear in that team at the end. My kids don’t quit. They never have, and they’re not going to start now.”

The Cardinals showed veteran mettle when they had to, however, despite not having a single senior on the roster.

“Not having a senior – you wouldn’t be able to tell if you came into a practice or watched one of our games,” Millington coach Greg Hudie said. “There’s leadership throughout, not just one or two people leading the team. This team does everything together, and they lead together. That’s what makes them special.”

Millington built an early lead, getting an RBI single from Sydney Bishop in the first inning and an RBI double from Elizabeth Bees in the second.

Sanford Meridian was able to get one run back in the bottom of the second inning on an RBI bloop single from Audrey Kielpinski. But Sherman mitigated the damage from what could have been a huge inning for the Mustangs, who had the bases loaded with no outs following the run. She struck out two and forced a pop out to end the threat and preserve the lead.

From there, Sherman was dominant, retiring 10 straight Sanford Meridian batters. After facing another bases-loaded jam, this one with one out in the sixth inning, Sherman again left three Mustangs stranded, this time with a groundout to first and a strikeout.

As Sherman was keeping Sanford Meridian hitters at bay, the Cardinals were slowly building their lead. A Sabrina Gates sacrifice fly scored a run in the top of the fifth inning, and a throwing error allowed Hannah Rabideau to score from third to give her team a 4-1 lead.

Bishop struck again in the top of the sixth inning with an RBI single that put her team up 5-1. She finished the game with three hits, while Rabideau, Darrien Roberts and Gates each had two.

Peyton Grice led Sanford Meridian with three hits, while Baleigh Hill had an RBI. Grice took the loss, allowing four earned runs and striking out one over seven innings.

VIDEO: Millington takes a 2-0 lead in the second inning on a double by Elizabeth Bees.

Coloma also will be making its first appearance in an MHSAA Softball Final after controlling its Semifinal against third-ranked Clinton. 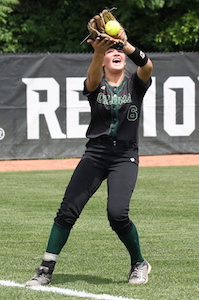 The No. 2 Comets (37-3) jumped out to an early lead and rode a strong pitching performance from Jaidyn Hutsell and stellar defense to claim the victory.

“It’s exciting; these girls have worked hard,” Coloma coach Wendy Goodline said. “I have seven seniors, four of them were my managers as eighth graders and they so deserve it. They just deserve it.”

Megan Koeningshof set the tone early for Coloma, drawing a walk on 12 pitches in the game’s first at-bat, then scoring the opening run on a sacrifice bunt from Morgan Wagner. Koeningshof would score the second run of the game in the third inning on an RBI single from Wagner.

In the top of the sixth, Clinton attempted to pitch around Koeningshof, intentionally walking her to load the bases. Kayla Yore responded with a bases-clearing double to put Coloma up 5-0.

“They walked Megan, which I thought was a great strategy,” Goodline said. “I just told Kayla, ‘Hey, you can hit this,’ and she came through. I’m excited for her.”

Clinton (37-2) would get one run back in the bottom of the sixth inning on an RBI single from Peyton Rodriguez, but that was all the Redskins could muster against Hutsell, who allowed four hits and one walk while striking out four to pick up the win.